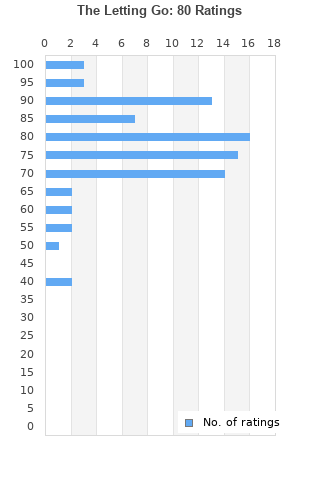 The Letting Go is ranked 2nd best out of 23 albums by Bonnie 'Prince' Billy on BestEverAlbums.com.

The best album by Bonnie 'Prince' Billy is I See A Darkness which is ranked number 919 in the list of all-time albums with a total rank score of 2,019. 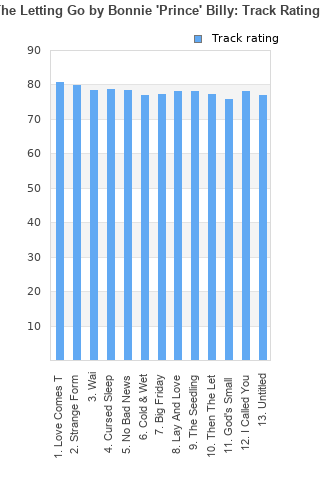 Rating metrics: Outliers can be removed when calculating a mean average to dampen the effects of ratings outside the normal distribution. This figure is provided as the trimmed mean. A high standard deviation can be legitimate, but can sometimes indicate 'gaming' is occurring. Consider a simplified example* of an item receiving ratings of 100, 50, & 0. The mean average rating would be 50. However, ratings of 55, 50 & 45 could also result in the same average. The second average might be more trusted because there is more consensus around a particular rating (a lower deviation).
(*In practice, some albums can have several thousand ratings)
This album is rated in the top 2% of all albums on BestEverAlbums.com. This album has a Bayesian average rating of 78.7/100, a mean average of 78.4/100, and a trimmed mean (excluding outliers) of 79.5/100. The standard deviation for this album is 11.6.

Will Oldham should really have changed his moniker again for this one. Because he's all grown up. This is no longer Will channeling a Bonnie "Prince" Billie to sing about the darkest recesses of his soul. This is just Will. Producing some of the best mature country & indie rock songs about love and hurt out there. These songs stand on their own without any of that drama and theater that our boy Will is sort of known for. And the harmonies with Dawn McCarthy are simply dead on. In a lot ways this may be the best album of Oldham's career. It’s certainly more consistent than his better known work I See A Darkness.

Grade: A. Super solid mature country/indie rock album that holds up well to multiple replays. These are timeless songs that are perhaps the best of Will’s impeccable & prolific career. I like this even more than No Other so this moves all the way up to number three.

Really something spectacular. None of the trappings of the indie folk that had become so common at this point.

Will Oldham goes to Iceland, and write this stunning record with the help of the smooth voice of Dawn McCarthy.

Your feedback for The Letting Go