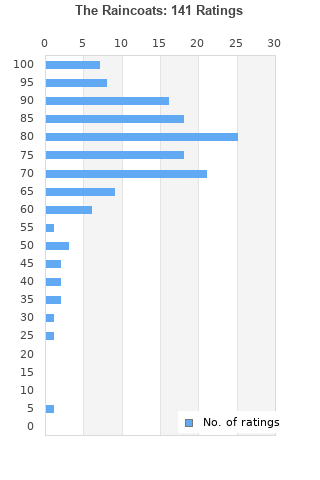 The Raincoats The Kitchen Tapes 1983 ROIR 1st pressing Like new never played
Condition: Like New
Time left: 6h 8m 19s
Ships to: Worldwide
$25.00
Go to store
Product prices and availability are accurate as of the date indicated and are subject to change. Any price and availability information displayed on the linked website at the time of purchase will apply to the purchase of this product.  See full search results on eBay 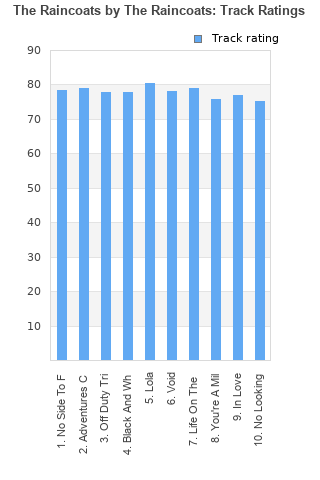 Rating metrics: Outliers can be removed when calculating a mean average to dampen the effects of ratings outside the normal distribution. This figure is provided as the trimmed mean. A high standard deviation can be legitimate, but can sometimes indicate 'gaming' is occurring. Consider a simplified example* of an item receiving ratings of 100, 50, & 0. The mean average rating would be 50. However, ratings of 55, 50 & 45 could also result in the same average. The second average might be more trusted because there is more consensus around a particular rating (a lower deviation).
(*In practice, some albums can have several thousand ratings)
This album is rated in the top 4% of all albums on BestEverAlbums.com. This album has a Bayesian average rating of 77.6/100, a mean average of 77.1/100, and a trimmed mean (excluding outliers) of 78.0/100. The standard deviation for this album is 15.5.

The term "criminally underrated" was practically coined for this album.

The single "Fairytale in the supermarket" was only on later re-issues of this album.

Missing the opening track, which is also the best on the album ("Fairytale In the Supermarket").

Solid, and fun. Will revisit.

I really like how minimalistic and raw this feels, paired with the screeching, dissonant VU-esque violins in here every so often, it really has this really great quirky vibe to it. I can imagine just a bunch of friends jamming in a garage and thinking "fuck it, let's get it recorded". Also it's pretty cool they're all-female.

I just saw this on someone's chart the other day. I was aware of, but not familiar with, The Raincoats so I decided to give it a shot. It's definitely my kind of late-70s music. Not bloated, not a touch of disco. Not complex, but not as simplistic as I would have expected.

I think that it's not my cup of coffee

Your feedback for The Raincoats