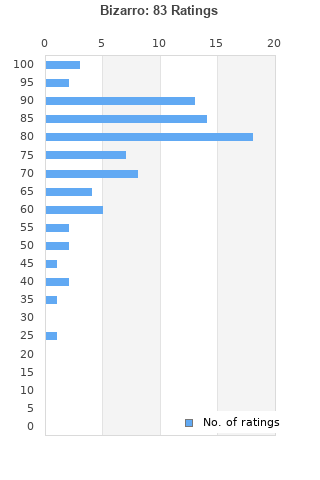 THE WEDDING PRESENT Bizarro RCA ‎– PD74302 Germany 1989 10trx CD
Condition: Very Good
Time left: 1d 7h 8m 5s
Ships to: Worldwide
$9.99
Go to store
Product prices and availability are accurate as of the date indicated and are subject to change. Any price and availability information displayed on the linked website at the time of purchase will apply to the purchase of this product.  See full search results on eBay

Bizarro is ranked 3rd best out of 14 albums by The Wedding Present on BestEverAlbums.com.

The best album by The Wedding Present is George Best which is ranked number 2385 in the list of all-time albums with a total rank score of 668. 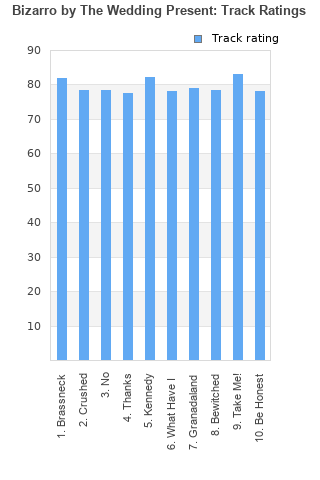 Rating metrics: Outliers can be removed when calculating a mean average to dampen the effects of ratings outside the normal distribution. This figure is provided as the trimmed mean. A high standard deviation can be legitimate, but can sometimes indicate 'gaming' is occurring. Consider a simplified example* of an item receiving ratings of 100, 50, & 0. The mean average rating would be 50. However, ratings of 55, 50 & 45 could also result in the same average. The second average might be more trusted because there is more consensus around a particular rating (a lower deviation).
(*In practice, some albums can have several thousand ratings)
This album is rated in the top 4% of all albums on BestEverAlbums.com. This album has a Bayesian average rating of 77.3/100, a mean average of 77.2/100, and a trimmed mean (excluding outliers) of 77.9/100. The standard deviation for this album is 14.8.

Not one but two of my favorite songs ever: of course Brassneck but also Take Me! This album is suppose to break away a bit from the heavy strung and more towards a heavier guitar sound but Take Me! is the ultimate frantic strum fest and it goes on for more than 9 minutes and I wasn't bored for a second: what a song. And you know what: the whole album is fantastic.

I've been listening to this a bit lately. I picked this up on tape in about 1990 and only really used to play Kennedy and brassneck, probably putting them on a compilation tape. It's only taken 30 years to realise what a gem this is and that the whole album is just as good as those two aforementioned tracks.

Consistently good the whole way through

This is a wonderful album and I prefer it to Seamonsters, but put it slightly behind George Best. I remember seeing the Wedding Present play Dundee in front of about 10 people. They were laughing at me because I had bought Age of Chance's second single and they thought Age of Chance were a bunch of w******.

This is the best album from Leeds Indie Royalty and ex-Brudenell Road residents - each song is a fast paced explosion ... Favourite Tracks are Kennedy,Granadaland and Brassneck

There's not nearly enough love for this, Gedge's finest hour. Less jangly than George Best, less morose than Seamonsters and all the better for it.

Your feedback for Bizarro