Upon The Wings Of Music (studio album) by Jean-Luc Ponty 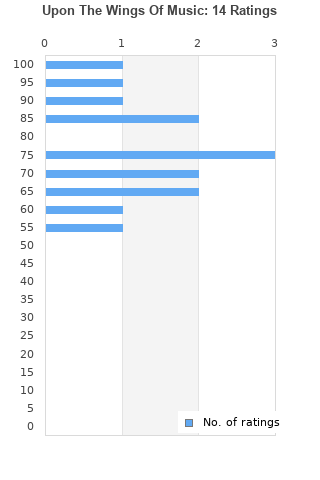 Upon the Wings of Music by Jean-Luc Ponty (CD, Atlantic (Label)) Rare
Condition: Like New
$28.00

Upon The Wings Of Music is ranked 5th best out of 29 albums by Jean-Luc Ponty on BestEverAlbums.com.

The best album by Jean-Luc Ponty is Enigmatic Ocean which is ranked number 12967 in the list of all-time albums with a total rank score of 87.

Listen to Upon The Wings Of Music on YouTube 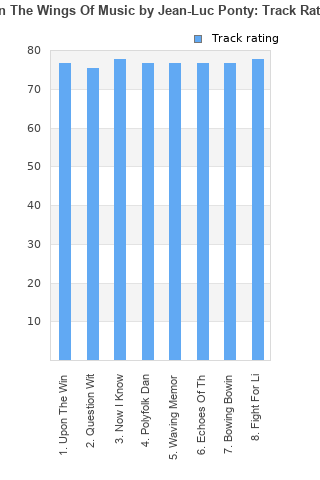 Upon The Wings Of Music rankings

Upon The Wings Of Music collection

Upon The Wings Of Music ratings

Rating metrics: Outliers can be removed when calculating a mean average to dampen the effects of ratings outside the normal distribution. This figure is provided as the trimmed mean. A high standard deviation can be legitimate, but can sometimes indicate 'gaming' is occurring. Consider a simplified example* of an item receiving ratings of 100, 50, & 0. The mean average rating would be 50. However, ratings of 55, 50 & 45 could also result in the same average. The second average might be more trusted because there is more consensus around a particular rating (a lower deviation).
(*In practice, some albums can have several thousand ratings)
This album is rated in the top 25% of all albums on BestEverAlbums.com. This album has a Bayesian average rating of 74.1/100, a mean average of 75.0/100, and a trimmed mean (excluding outliers) of 75.0/100. The standard deviation for this album is 12.7.

Upon The Wings Of Music favourites

Upon The Wings Of Music comments

Good record. I really appreciate the intonation, techniques, bends and slides used on Jeans electric violin. He should not have let anyone else take solos on this record, because the guitarist and keyboardists actually sounded like they were soloing pentatonic????wtf "Bowing-Bowing" is a real standout on this record: a new jazz standard that is a testament to any and all two part harmonies. The last song kind of sucks, solo is not that good, motif is boring. The first song "Upon the wings of music" has very interesting motifs but could have been executed differently, theres so much i could say about this record but Im bored now. The keyboardist doesnt pitch bend so her solos are boring as fuck next to Pontys. I get lost in all of these solos and cant remember what song I am in. I vote for more developing melodic motifs, and less soloing.

Your feedback for Upon The Wings Of Music