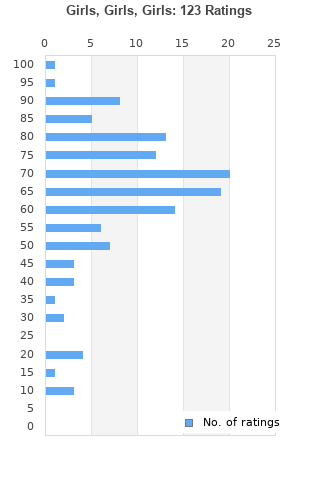 Girls, Girls, Girls is ranked 4th best out of 16 albums by Mötley Crüe on BestEverAlbums.com.

The best album by Mötley Crüe is Dr. Feelgood which is ranked number 2083 in the list of all-time albums with a total rank score of 793. 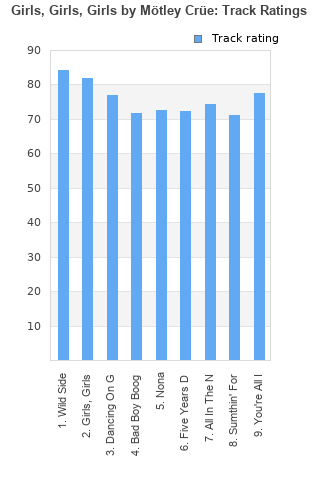 Rating metrics: Outliers can be removed when calculating a mean average to dampen the effects of ratings outside the normal distribution. This figure is provided as the trimmed mean. A high standard deviation can be legitimate, but can sometimes indicate 'gaming' is occurring. Consider a simplified example* of an item receiving ratings of 100, 50, & 0. The mean average rating would be 50. However, ratings of 55, 50 & 45 could also result in the same average. The second average might be more trusted because there is more consensus around a particular rating (a lower deviation).
(*In practice, some albums can have several thousand ratings)
This album has a Bayesian average rating of 65.4/100, a mean average of 64.7/100, and a trimmed mean (excluding outliers) of 64.7/100. The standard deviation for this album is 19.7.

For me, this has the same problem as the Dr Feelgood album. Two world-beater songs (Wild Side and the title track), and the rest is either forgettable or awful. Nikki himself admits that it's a miracle this record even has two strong songs as he was strung out on heroin during this period and his creativity had dried up.

This is the album that showed that Motley Crue were more than just a gimmicky hair metal band. This is a legitmately GREAT rock and roll record. Yeah, it's cheesy, but cheese is part of the whole Motley Crue schtick. You either love it or hate it.

Motley Crue was stupid, but catchy. No harm done. One of the best hair metal bands from the 80s.