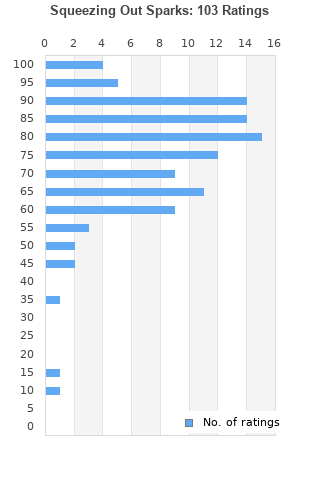 Squeezing Out Sparks is ranked as the best album by Graham Parker.

Better Than Ezra: Legends of the Fall 2022 Tour
The Queen, Wilmington, United States. 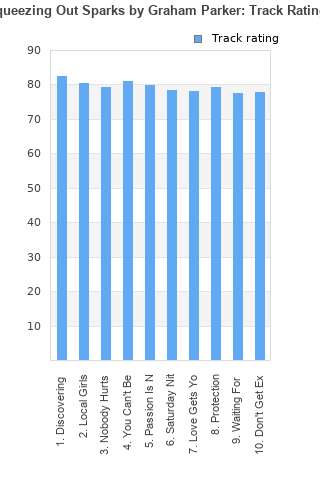 Rating metrics: Outliers can be removed when calculating a mean average to dampen the effects of ratings outside the normal distribution. This figure is provided as the trimmed mean. A high standard deviation can be legitimate, but can sometimes indicate 'gaming' is occurring. Consider a simplified example* of an item receiving ratings of 100, 50, & 0. The mean average rating would be 50. However, ratings of 55, 50 & 45 could also result in the same average. The second average might be more trusted because there is more consensus around a particular rating (a lower deviation).
(*In practice, some albums can have several thousand ratings)
This album is rated in the top 7% of all albums on BestEverAlbums.com. This album has a Bayesian average rating of 76.3/100, a mean average of 75.3/100, and a trimmed mean (excluding outliers) of 76.6/100. The standard deviation for this album is 16.1.

An underrated artist and underrated album. Squeezing out sparks, is one of the great British LP's of the seventies. Parker and co. create a sound similar to what Elvis Costello would sound like a year or so down the line. SOS, features some fantastic songs, such as, discovering Japan, waiting for the ufos, and the brilliant, you can't be too strong. A superb album then, deserves more credit.

This is both Graham Parker's best album and a high point of the late seventies.

Very much underrated. Adding to the fun is backup band The Rumour, in my opinion the best backing band ever. With a.o. Brinsley Schwarz, of the eponymous band.

Solid record, fun and catchy. Very similar to Elvis Costello, though its classic rock side is much more prominent. The guitarist is excellent.

This album is OK, but his real gem is "Heat Treatment" from 1976 on Mercury..

Your feedback for Squeezing Out Sparks