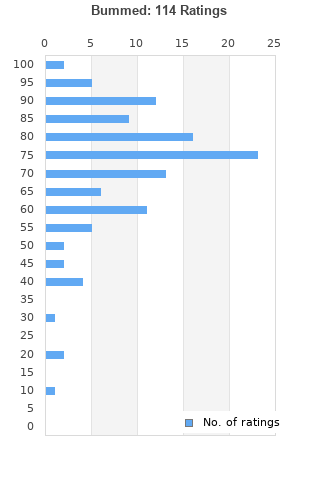 HAPPY MONDAYS - Bummed - ORIGINAL 1988 UK A1/B1 PRESSING LP album EXC++ /NM
Condition: Used
Time left: 1d 2h 51m 20s
Ships to: Worldwide
£33.99
Go to store
Product prices and availability are accurate as of the date indicated and are subject to change. Any price and availability information displayed on the linked website at the time of purchase will apply to the purchase of this product.  See full search results on eBay

Bummed is ranked 2nd best out of 8 albums by Happy Mondays on BestEverAlbums.com.

The best album by Happy Mondays is Pills 'N' Thrills And Bellyaches which is ranked number 1042 in the list of all-time albums with a total rank score of 1,784. 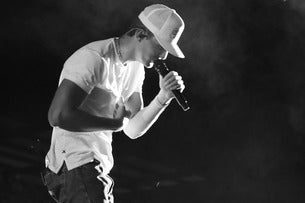 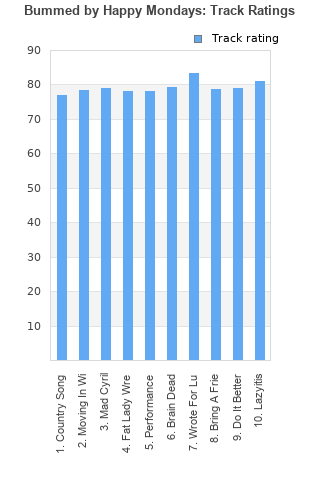 Rating metrics: Outliers can be removed when calculating a mean average to dampen the effects of ratings outside the normal distribution. This figure is provided as the trimmed mean. A high standard deviation can be legitimate, but can sometimes indicate 'gaming' is occurring. Consider a simplified example* of an item receiving ratings of 100, 50, & 0. The mean average rating would be 50. However, ratings of 55, 50 & 45 could also result in the same average. The second average might be more trusted because there is more consensus around a particular rating (a lower deviation).
(*In practice, some albums can have several thousand ratings)
This album has a Bayesian average rating of 74.0/100, a mean average of 72.9/100, and a trimmed mean (excluding outliers) of 74.1/100. The standard deviation for this album is 16.1.

Long before the laconic Arctic Monkeys was this great album. Haven't played in years but always remember when it was huge and so Madchester

Amazing band. Albumpacked full of great tracks but ruined by having hannett produce it. He was perfect for joy div but sucked the funk out of this. Should have been an album up there with the best. Shame. Check the live versions. Looking forwsrd to them doing this album.live next week!

Happy Mondays doing what they do best. The Mondays were always the sleaziest band ever :-) This was great, along with their Hallelujah EP and the Madchester VHS video spawned a drug fuelled teenage rebellion from me and the rest is history.

The album that spawned 'Madchester'. A great Indie/dance crossover album

Your feedback for Bummed