Strangers To Ourselves (studio album) by Modest Mouse 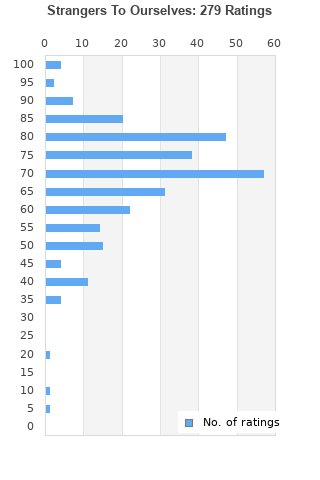 Strangers to Ourselves [Slipcase] by Modest Mouse (CD, Mar-2015, Columbia (USA))
Condition: Very Good
Time left: 21h 13m 26s
Ships to: Worldwide
$4.99
Go to store
Product prices and availability are accurate as of the date indicated and are subject to change. Any price and availability information displayed on the linked website at the time of purchase will apply to the purchase of this product.  See full search results on eBay

Strangers To Ourselves is ranked 7th best out of 14 albums by Modest Mouse on BestEverAlbums.com.

The best album by Modest Mouse is The Moon & Antarctica which is ranked number 135 in the list of all-time albums with a total rank score of 12,989. 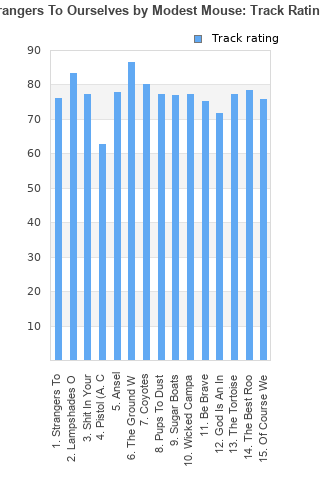 The Ground Walks, With Time In A Box
Rating: 86 (84 votes)Comments:

Strangers To Ourselves rankings

Strangers To Ourselves collection

Strangers To Ourselves ratings

Rating metrics: Outliers can be removed when calculating a mean average to dampen the effects of ratings outside the normal distribution. This figure is provided as the trimmed mean. A high standard deviation can be legitimate, but can sometimes indicate 'gaming' is occurring. Consider a simplified example* of an item receiving ratings of 100, 50, & 0. The mean average rating would be 50. However, ratings of 55, 50 & 45 could also result in the same average. The second average might be more trusted because there is more consensus around a particular rating (a lower deviation).
(*In practice, some albums can have several thousand ratings)
This album has a Bayesian average rating of 69.6/100, a mean average of 68.8/100, and a trimmed mean (excluding outliers) of 69.5/100. The standard deviation for this album is 14.3.

Strangers To Ourselves favourites

Strangers To Ourselves comments

Certainly their least cohesive album in regards to stylistic flow, but this opens the door for a unique collage of styles. Lyrics are mostly much more straightforward than their previous work, which leads to songs such as Ground Walks, Pups to Dust and Sugar Boats standing out in this regard. Musically speaking, I consider We Were Dead to be their apex in musical mastery and that tightly bottled manic energy they do exceptionally well, aided by the presence of Johnny Marr. It is jarring to move from that record to this in a chronological listen, as compositions and the general soundscape here feature far less of that slick and complex punch. This doesn't prevent the album from still featuring catchy hooks and several memorable melodies, however.

This will stick out as a very unpopular opinion: Pistol is easily my favourite track. Not only does it stick out as completely new sonic territory for the band, especially in comparison with their 90's work, they do it in a manner that manages to be both amusing *and* genuinely groovy. I find it tragic that this track gets such a bad rap, as it takes risks that largely pay off. It's often argued that Pistol puts a wrench in the atmosphere of the record, but I'd argue the rest of the record puts a wrench in Pistol's atmosphere.

Shit In Your Cut stands out as the drabbest song Modest Mouse has ever recorded, with a rudimentary bass line and horrid lyrics/production choices. My mind spins wondering where in the creative process it was decided a good idea to make this the third song on the record when it's such an absolute slogging momentum killer after Lampshades On Fire.

Pistol
The Best Room
The Ground Walks, With Time In a Box
Pups to Dust
Lampshades On Fire

Worst Tracks:
Shit In Your Cut
Be Brave

This album has grown on me quite a bit since release date. It's a little uneven by Brock's standards, I s'pose, but when the highlights are some of his best work.

Not a disappointment. Not excedent of expectations. Solid, if not a bit overstuffed.

Not cohesive at all... Certainly not an album moment like Moon & Antartica was. However, it's still has some absolute gems, and it's still got that Modest Mouse charm. It's an average MM album, which is still miles better than most.

The album reviews are very divided, but that doesn't matter it's just a great album!

Good album with a couple of great songs. I'm just happy to have a new Modest Mouse album.

Not a great Modest Mouse album, but there's some good songs in here. Most songs are just ok, though, they're enjoyable and fun to listen to, but just not very memorable at all. It's disappointing because MM can and has done better, but it's still my favorite album of the year so far

The Ground Walks and Lampshades on Fire are excellent songs nevertheless

Best songs: The Ground Walks, Lampshades on Fire, Pops to Dust, Strangers to Ourselves, The Best Room, Sugar Boats
Worst song: Pistol (gonna have to agree with everyone)

Look, Modest Mouse is my favorite band but I'm sadly not feeling this one. Not bad, just unmemorable like WWDBTSES. The production remains relatively flat, Of Course We Know could've been great if the massive bass drum was heavier and louder. The groovier moments (Best Room, Lampashades on Fire) are some of the better moments here but I sadly can't get being most of what's being done here.

Your feedback for Strangers To Ourselves