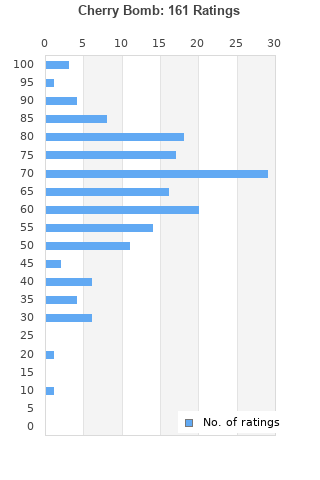 Cherry Bomb is ranked 5th best out of 8 albums by Tyler, The Creator on BestEverAlbums.com.

The best album by Tyler, The Creator is Igor which is ranked number 298 in the list of all-time albums with a total rank score of 6,391. 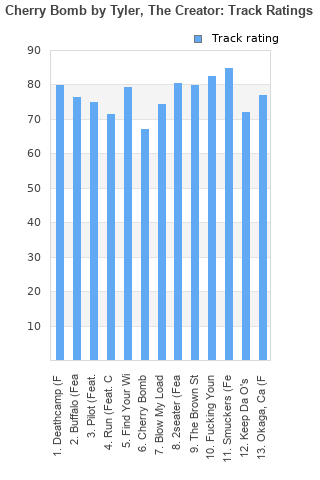 Rating metrics: Outliers can be removed when calculating a mean average to dampen the effects of ratings outside the normal distribution. This figure is provided as the trimmed mean. A high standard deviation can be legitimate, but can sometimes indicate 'gaming' is occurring. Consider a simplified example* of an item receiving ratings of 100, 50, & 0. The mean average rating would be 50. However, ratings of 55, 50 & 45 could also result in the same average. The second average might be more trusted because there is more consensus around a particular rating (a lower deviation).
(*In practice, some albums can have several thousand ratings)
This album has a Bayesian average rating of 64.9/100, a mean average of 64.0/100, and a trimmed mean (excluding outliers) of 64.4/100. The standard deviation for this album is 15.5.

Staples’ more renowned buddy, Tyler has always been quite a viable provocateur, if only he were able to convince anyone he had a reason for acting up. Not to lionise him any further, but the side effect of his latest bout of childish incidents, such as claiming it was racist for him to have been banned from the UK, is a restless album filled with anger and humour in equal measure.

Best track: Cherry Bomb. He’s no Death Grips but the distortion on this track is a good match for his bilious delivery.

I actually find this to be this album to be his most consistent. He sticks to the themes from beginning to end and I like how he expanded to a more rock based sound on songs like Deathcamp and the title track. Week points are Run and Okaga where he tries something different with his vocals. Overall really solid and balanced mix of his "romantic" songs with his more high energy bangers.

After becoming a fan of Tyler from listening to Flower Boy Igor, and Wolf, I went back and listened to this for the first time and really enjoyed it! It's been pretty remarkable to hear his progression as a producer, and I'm disappointed that I didn't give this a chance sooner. It's kind of messy, but most of the stuff on this album is really good. Definitely closer to Igor in style, I'd probably recommend this one to fans of that album.

The instrumentals are great. I'm not a huge fan of the offensive for its own sake side of Tyler because he really is a great lyricist when he wants to be. All in all this is a pretty weak offering from him and it buries his strength for no discernible reason.

Instrumentals were mostly great, but the lyrics? Ummm... Let's just say he was banned in U.K for a reason.

I think tyler is gonna be recognized with great artistic merit in the years to come. So poorly rated here, it's actually not even legitimate. But I get that watching a fantano review is more convenient than listening to the album.

Instrumentals were top notch soul pop. Lyrical content was dissapointing, but that's to be expected from the Odd Future camp. Vocal quality is crap. The whole album sound wise is horrid it's basically clipping the whole time. Yeezy/Weezy features were unexpected and nice. But other than that it was dissapointing.

I do like Tyler The Creator, but I did not really enjoy this album. It just seemed like a mess to me.

I didn't like this album. Plain and simple. Which is weird considering how much I enjoyed Goblin and thought Wolf had its moments as well. This though just didn't do it for me.

Your feedback for Cherry Bomb