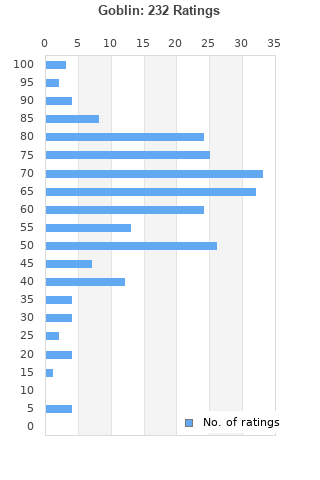 TYLER, THE CREATOR Goblin (new and sealed cd)
Condition: Brand New
Time left: 1d 8h 27m 48s
Ships to: Worldwide
$36.00
Go to store
Product prices and availability are accurate as of the date indicated and are subject to change. Any price and availability information displayed on the linked website at the time of purchase will apply to the purchase of this product.  See full search results on eBay

Goblin is ranked 5th best out of 8 albums by Tyler, The Creator on BestEverAlbums.com.

The best album by Tyler, The Creator is Igor which is ranked number 332 in the list of all-time albums with a total rank score of 5,955. 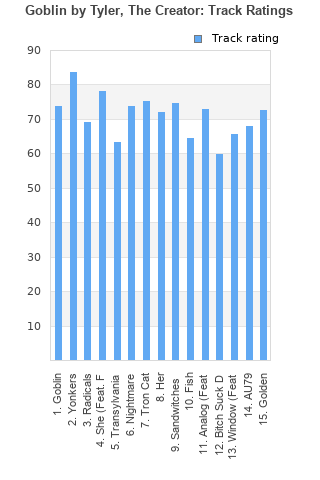 Rating metrics: Outliers can be removed when calculating a mean average to dampen the effects of ratings outside the normal distribution. This figure is provided as the trimmed mean. A high standard deviation can be legitimate, but can sometimes indicate 'gaming' is occurring. Consider a simplified example* of an item receiving ratings of 100, 50, & 0. The mean average rating would be 50. However, ratings of 55, 50 & 45 could also result in the same average. The second average might be more trusted because there is more consensus around a particular rating (a lower deviation).
(*In practice, some albums can have several thousand ratings)
This album has a Bayesian average rating of 63.7/100, a mean average of 62.2/100, and a trimmed mean (excluding outliers) of 63.3/100. The standard deviation for this album is 17.8.

This line comes after his repeated hook of "kill people, burn sh*t, f*ck school." You gotta listen to every line, not just cherrypick the bad ones. Sure, he says some shitty stuff, and criticizing him for that is justified. But condensing this whole album to an exercise in shock value is simply wrong. There is so much more depth here. For every sadistic "Tron Cat", there is an equally heartbreaking and confessional "Her".

However, the music is also kinda mediocre for a little too much of the album for it to be considered really good. Still, I think its an interesting listen, and a much better concept album than most of what passes for concept in hip-hop

"i'll probably just youtube it..."
And so I did. It's not exactly fair I guess to judge the album after hearing its songs once on youtube, but listening to them did confirm my expectations of this album and my view of Tyler in general.

The way I see it, there are several sides to Tyler. There's the immature side which spawned one of the worst songs of the year, Bitch Suck Dick, there's the "crazy" side of Wolf Hailey, which is reminiscent of Eminem's "Slim Shady" persona, not just because of the concept of an alter ego, but the violent, misogynistic lyrics. The latter kinda remind me of Biggie as well. There's good and bad in that though, plenty of times the rhymes just aren't that clever as Tyler maybe thinks they are.
Then there's another side to Tyler that I see on songs like Bastard (not on Goblin), Goblin, Her, which deal a lot with his personal problems and self-loathing and are just generally very emotional. Again this reminds me of certain rappers before him (Biggie's Suicidal Thoughts anyone?), but all those songs that I mentioned are amongst his best (Bastard in particular).

Finally, there's a side to Tyler that manifests itself in what is one of the highlights of the year in general - Yonkers. This song, along with its wonderful video shows Tyler not just as a rapper, but as a complete artist. Clever lyrics (this time, his two "personas" clash), an even better video, that was interestingly directed by Tyler himself, and featuring what is also a great acting performance by Tyler. Sick beat too. Unfortunately there's no other moments like that on this album, but to me it shows that Tyler is someone to keep an eye on in the future.
Apparently his next album will be focused more on the beats, and less on the rapping. Can't say if that is an excellent idea or not, but I'm looking forward to it. After all, I can't complain about the beats on this album and the instrumental track AU79 is actually among the better ones here.

An equal messure of thriller and filler to me,would have been better as a 6 or 7 track ep.Some songs like Sandwitches and Yonkers are about the best hip-hop tracks of the last ten year but quite a lot of the rest are terrible.Plus the production is pretty bad and a lot of Tylers ramblings should have been cut,the album would be a lot better also if it was 15 minutes shorter.On a side note,do not let this album wheter you like it or not stop you goin to see OFWGKTA live,the best live experience you're ever likely to see(well one of them anyways).

I heard two songs off this... Yonkers, which is just about my favourite of the year and Bitch Suck Dick which is just about the worst song I heard all year. Now I don't know whether to listen to the whole album
(i'll probably just youtube it, I do it a lot lately *_*)

Damn. Some of these songs are killer. It's just raw emotion some times. The first 4 tracks are crazy good. After that, I don't find much that catches my interest though. And, even though this isn't a massive album, I could see this starting a hip-hop revolution.

The first two tracks and the last three tracks (including the instrumental) are actually quite good. It's just that the middle gets pretty bogged down. There are some killer lines toward the end about his views on children on meds, his status as a cult figure to white kids, and how he feels about the fact that millions online want Earl freed for their own entertainment, while all he wanted was his friend back.

Of all the songs in the middle, I liked Her the most because it reminded me how it feels on the inside when someone you're crushing on is out with somebody else, breaks up with them, and then almost immediately goes running back to him. The lyrics are pretty juvi, but then so is Tyler.

Your feedback for Goblin