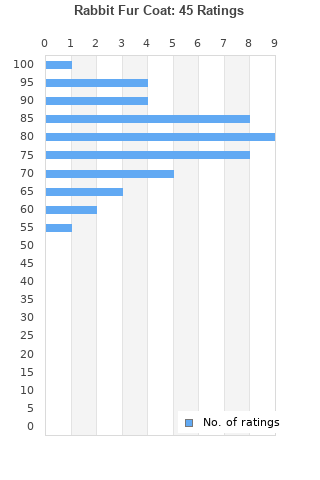 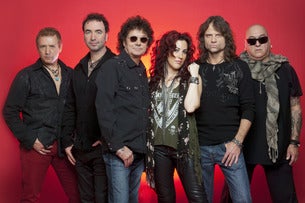 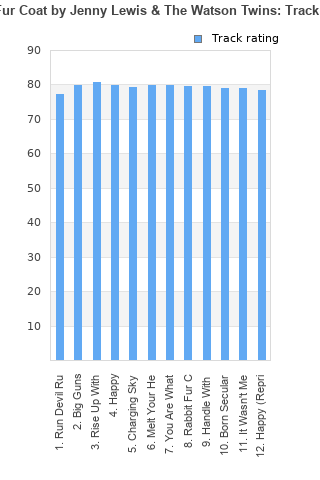 Rating metrics: Outliers can be removed when calculating a mean average to dampen the effects of ratings outside the normal distribution. This figure is provided as the trimmed mean. A high standard deviation can be legitimate, but can sometimes indicate 'gaming' is occurring. Consider a simplified example* of an item receiving ratings of 100, 50, & 0. The mean average rating would be 50. However, ratings of 55, 50 & 45 could also result in the same average. The second average might be more trusted because there is more consensus around a particular rating (a lower deviation).
(*In practice, some albums can have several thousand ratings)
This album is rated in the top 3% of all albums on BestEverAlbums.com. This album has a Bayesian average rating of 78.2/100, a mean average of 79.4/100, and a trimmed mean (excluding outliers) of 79.4/100. The standard deviation for this album is 9.5.

"rabbit fur coat" from jenny lewis with the watson twins (that jenny lewis from rilo kiley) is a very understated, yet witty cross-in-cheek album exploring religion, its pursuers and false idols. "rise up with fists!!!" is the early centerpiece telling little synopses tales "Like when you wake up behind the bar / Trying to remember where you are / Having crushed all the pretty things / There but for the grace of God, go I ". The watson twin harmonies are like her conscious or maybe angels from heaven who've almost hung around earth long enough (see "city of angels") that they're numbed to our plight. Same religious tussle on "the charging sky". going to church because "it's a surefire bet I'm gonna die / So I'm taking up praying on Sunday nights / And it's not that I believe in your almighty / But I might as well as insurance or bail". There are a couple of songs in a row that'll warm your heart's cockles, ending with "you are what you love" (and "not what loves you back"), a song about fighting feeling all alone, sung as "Because we live in a house of mirrors / We see our fears and everything / Our songs, faces, and second hand clothes / But more and more we're suffering / Not nobody, not a thousand beers / Will keep us from feeling so all alone" and i like the chorus of "I'm in love with illusions / So saw me in half / I'm in love with tricks / So pull another rabbit out your hat". haha. There's even a good cover of the Traveling Wilburys "Handle With Care" featuring guest spots from ben gibbard, conor oberst and m.ward. Jenny Lewis is quite charming hear and brings the wit and topicality you'd find on a rilo kiley album, but strips the songs away to their base content and her pretty voice, then adds on watson twin harmonies in just the right places.

Your feedback for Rabbit Fur Coat