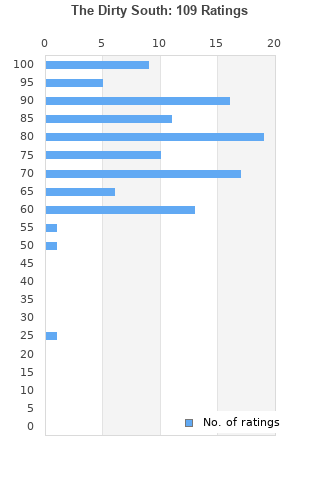 Drive-By Truckers - The Dirty South [New Vinyl LP]
Condition: New
Time left: 2d 9h 54m 19s
Ships to: Worldwide
$27.65
Go to store
Product prices and availability are accurate as of the date indicated and are subject to change. Any price and availability information displayed on the linked website at the time of purchase will apply to the purchase of this product.  See full search results on eBay

The Dirty South is ranked 2nd best out of 18 albums by Drive-By Truckers on BestEverAlbums.com.

The best album by Drive-By Truckers is Southern Rock Opera which is ranked number 2183 in the list of all-time albums with a total rank score of 750. 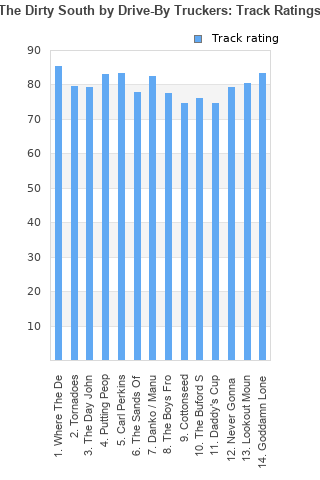 Rating metrics: Outliers can be removed when calculating a mean average to dampen the effects of ratings outside the normal distribution. This figure is provided as the trimmed mean. A high standard deviation can be legitimate, but can sometimes indicate 'gaming' is occurring. Consider a simplified example* of an item receiving ratings of 100, 50, & 0. The mean average rating would be 50. However, ratings of 55, 50 & 45 could also result in the same average. The second average might be more trusted because there is more consensus around a particular rating (a lower deviation).
(*In practice, some albums can have several thousand ratings)
This album is rated in the top 3% of all albums on BestEverAlbums.com. This album has a Bayesian average rating of 78.4/100, a mean average of 78.4/100, and a trimmed mean (excluding outliers) of 78.9/100. The standard deviation for this album is 12.9.

Country is not exactly my thing, but this is an album that really stands out - though you could argue this is more rock than country. The only complaint would be that it is too long, I can imagine this being so much better by removing tracks 9 to 13 - ok, maybe too much but you get my point.

Really love the album covers of this band... let's leave it at that. But jokes aside, I didn't hate it.

DBT is such an underrated band. This album especially has 3 excellent songwriters firing on all cylinders.

Continues where Decoration Day left off, taking their music into a slighty more high-concept, dirty-southern gothic direction. While it lacks some of the brutal, blunt impact of their previous album, it's still very strong, with it's great trio of songwriters continuing to work wonders in their shawdow-y, conflicted view of the modern south. All deserve credit but Isbell's compositions still stand out the most- while still good, I don't think the band's music was ever quite as potent and immediate after he left.

The high-water mark for great Southern rock band Drive-By Truckers, who understood something even Lynyrd Skynyrd never did: what principal Songwriter Patterson Hood has called "the duality of the Southern thing." I'm not even sure that the best track here is one of Hood's, though; that honor has to go to Jason Isbell's brutal ballad "Goddamn Lonely Love."

This is the third of a three-album peak for this band, from a time when they had three excellent songwriters all hitting their marks. The real standout on this one is Jason Isbell, who contributed three instant classics in "Danko/Manuel," "Never Gonna Change," and "Goddamn Lonely Love."

Your feedback for The Dirty South