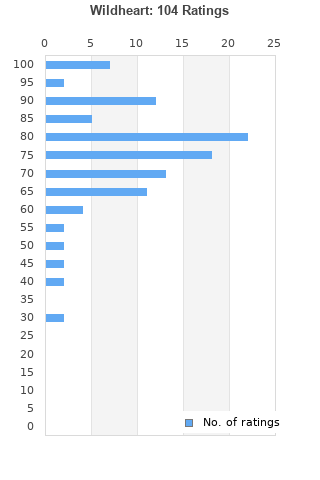 Wildheart is ranked as the best album by Miguel. 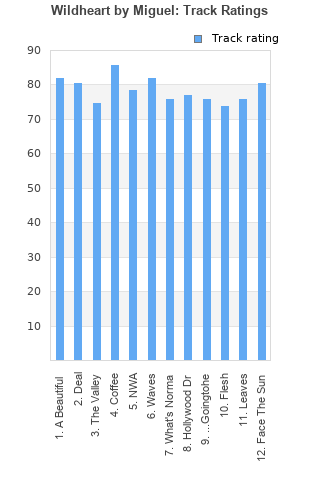 Outliers can be removed when calculating a mean average to dampen the effects of ratings outside the normal distribution. This figure is provided as the trimmed mean. A high standard deviation can be legitimate, but can sometimes indicate 'gaming' is occurring. Consider a simplified example* of an item receiving ratings of 100, 50, & 0. The mean average rating would be 50. However, ratings of 55, 50 & 45 could also result in the same average. The second average might be more trusted because there is more consensus around a particular rating (a lower deviation).
(*In practice, some albums can have several thousand ratings)
This album is rated in the top 10% of albums on BestEverAlbums.com. This album has a mean average rating of 75.0/100. The trimmed mean (excluding outliers) is 75.9/100. The standard deviation for this album is 14.2.

If Kaleidoscope Dream was like Prince-lite, then Wildheart is like Prince having sex with Prince on a Prince bedspread. Basically, Miguel will never escape the comparisons but he sure as hell can write a song that sounds like sexual intercourse. In fact, he wrote twelve of them and it’s pretty killer.

Best track: FLESH. Didn’t think his voice could get higher or breathier until I heard this one.

For me the biggest difference between Miguel and Frank Ocean is that Ocean makes music that is much harder to categorize. Channel Orange had elements of soul, pop, funk, rock, and of course R&B. To me, this seems like your standard R&B, but with unique enough beats for it to be labeled "alternative." Don't get me wrong, there are some great songs on here. Coffee and goingtohell are both memorable, and Waves is one of the best songs I've heard this year. But ultimately the album has a lot of uninteresting moments and Miguel's voice doesn't do much for me. Add in some pretty low lows - DEAL is completely forgettable and what's normal anyway is cringe-worthy considering it's full of cliches and is ultimately being sung by a guy who's pretty normal, all things considered - and this isn't an album I need to hear again. Which is a shame considering how great Waves is, but the rest doesn't distance itself from most R&B. Granted it's not a genre I'm well-versed in, but for now I'm on #teamocean.

A bit better than his previous album... nothing extraordinary though. The biggest different between him and Frank Ocean is that Miguel just lacks genuine emotion. Some of these tracks are ok songs, but it just doesn't feel like Miguel cares...

I dunno. Maybe that's just me.

The major improvement between this and his last album is the strength of his song writing and lyricism. There are some pretty good verses and hooks.

Overall, it's a decent record, and I'll probably never go back to it apart from maybe 2-3 songs.

@Pegasus u are so right about he kept the version without wales, so much better that way. nice album

some songs could've been a little better, yet other songs like a beautiful exit and coffee (glad he kept the version without wales on the album) are some of the best R&B songs i've ever heard

Your feedback for Wildheart