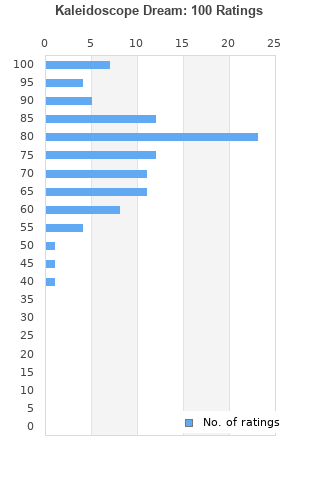 Kaleidoscope Dream is ranked 2nd best out of 4 albums by Miguel on BestEverAlbums.com.

The best album by Miguel is Wildheart which is ranked number 3579 in the list of all-time albums with a total rank score of 390. 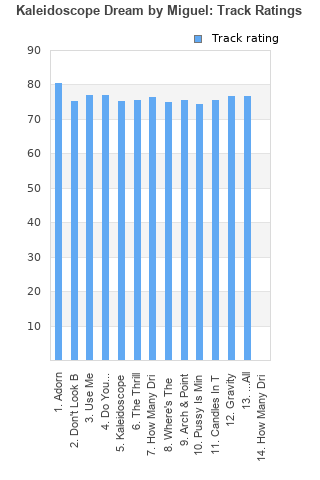 Rating metrics: Outliers can be removed when calculating a mean average to dampen the effects of ratings outside the normal distribution. This figure is provided as the trimmed mean. A high standard deviation can be legitimate, but can sometimes indicate 'gaming' is occurring. Consider a simplified example* of an item receiving ratings of 100, 50, & 0. The mean average rating would be 50. However, ratings of 55, 50 & 45 could also result in the same average. The second average might be more trusted because there is more consensus around a particular rating (a lower deviation).
(*In practice, some albums can have several thousand ratings)
This album is rated in the top 9% of albums on BestEverAlbums.com. This album has a mean average rating of 76.0/100. The trimmed mean (excluding outliers) is 76.2/100. The standard deviation for this album is 13.0.

There's some good stuff on here. His voice is nice and there are some great melodies and production is here good. Some of the lyricism is pretty abysmal but I generally don't let it detract unless it's so bad, and he pushes it with me. Certainly some Frank Ocean influence.

One of the best R&B talents of the decade. Amazing album.

Some songs are a little too sexual, but as an overall album it's pretty great.

This is the edgy r&b of the era. If you've heard the-dream or weeknd, you might have some idea of what i'm talking about. The samples and vocals hear are clearer as with lloyd's smooth 2011 album.

Miguel said that he wanted to change the face of R&B, and if that means going back to 90s R&B then I'm all for it. Outside of one semi-joke track, there's not as many Playstation drops, John Mayer licks, or other toys that you find on Planet Orange but I think that helps the album rather than hinder it. It's just a good album with solid vocals and solid lyrics.

Your feedback for Kaleidoscope Dream