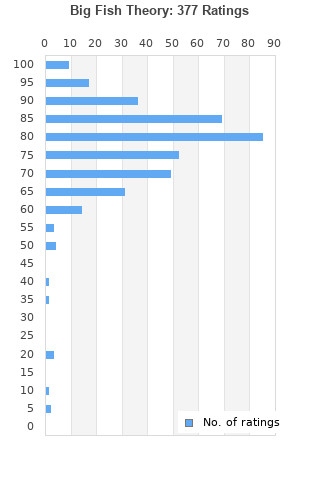 Big Fish Theory is ranked 2nd best out of 9 albums by Vince Staples on BestEverAlbums.com.

The best album by Vince Staples is Summertime '06 which is ranked number 1241 in the list of all-time albums with a total rank score of 1,444. 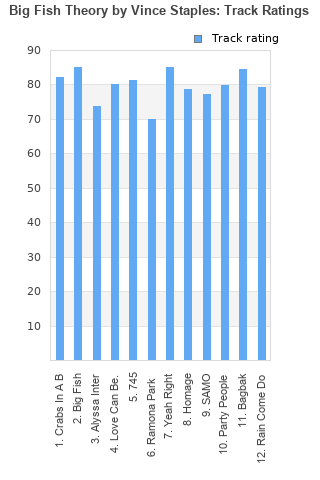 Rating metrics: Outliers can be removed when calculating a mean average to dampen the effects of ratings outside the normal distribution. This figure is provided as the trimmed mean. A high standard deviation can be legitimate, but can sometimes indicate 'gaming' is occurring. Consider a simplified example* of an item receiving ratings of 100, 50, & 0. The mean average rating would be 50. However, ratings of 55, 50 & 45 could also result in the same average. The second average might be more trusted because there is more consensus around a particular rating (a lower deviation).
(*In practice, some albums can have several thousand ratings)
This album is rated in the top 3% of all albums on BestEverAlbums.com. This album has a Bayesian average rating of 78.3/100, a mean average of 77.3/100, and a trimmed mean (excluding outliers) of 78.4/100. The standard deviation for this album is 13.1.

A much more colourful album than the previous Summertime ‘06. Production is a lot more creative and takes elements from dance and house music in places. The dance inspired pre chorus on “Yeah Right” that breaks away from the abrasive production and brings Kendrick Lamar is fantastic. Although this doesn’t always work (“Love Can Be…” is not great). Staples has more effective hooks here and has a lot more standout tracks because of it. “”Big Fish” and “Yeah Right” being the best examples. A good album overall.

Love the production, i just feel like the second half of the record is not as cosistent as the first half. Least fav. Rain come down

You can put a scatterbrain techno or IDM production behind him and Vince Staples can STILL do no wrong. Fantastic sophomore record.

The dance beats are amazing and just combines with his voice, I don't know. This guy really has something interesiting here.

The only downside it's sometimes It gets a little repetitive.

Vince did something cool here that ended up paying off a bit.

the intersection between IDM and rap sounds like the perfect combination for someone who loves both, but unfortunately this doesn't quite cut it. I think i'll just stick to flying lotus.

This is one of the most experimental hip-hop albums to hit the mainstream, and it's great because it challenges what is popular while adding creativity for other artists to look up to. I've got my eye on Vince Staples because he's quickly becoming one of my favourite artists and rappers.

So, I was wrong. This is actually quite a cool album, if given proper consideration. Part of the problem with appreciating it is that it's so different in both instrumentation and general mood than most other hip-hop. All of the tracks have a really unique kinda UK garage/downtempo/IDM sound to them. Crabs in A Bucket culd literally be straight off a Burial record. Also more generally, the album has a lot more of a sparse and dark feel to it. Even the tracks that could be played at a party would make for a pretty dark party. Though it may seem fairly hookless, its just a lot more understated and subtle. Overall, a pretty cool unique album

A fairly underwhelming album as a whole. The IDM influence is interesting for sure, but doesn't amount to much. Much of the album seems pretty devoid of hooks. The IDM makes it seem very dry, while he seems to be trying to create more banging songs with his delivery style and lyrics. The one spot where I looked up and thought "Oh this is sick" is when kendrick came on. The second half of BagBak breaks out a bit too

Your feedback for Big Fish Theory