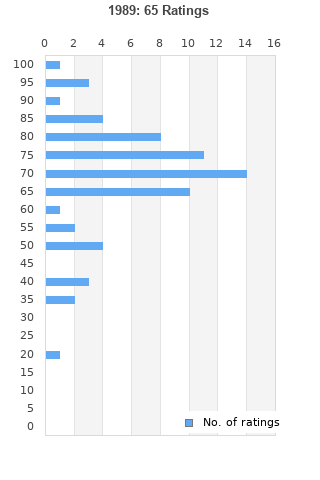 1989 is ranked 7th best out of 28 albums by Ryan Adams on BestEverAlbums.com.

The best album by Ryan Adams is Heartbreaker which is ranked number 987 in the list of all-time albums with a total rank score of 1,880. 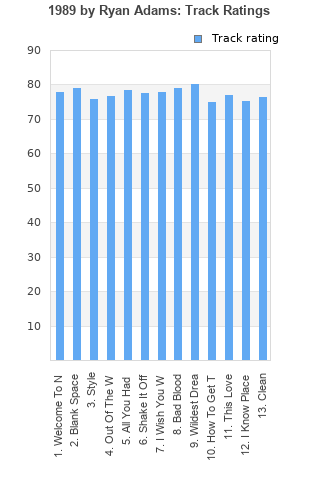 Rating metrics: Outliers can be removed when calculating a mean average to dampen the effects of ratings outside the normal distribution. This figure is provided as the trimmed mean. A high standard deviation can be legitimate, but can sometimes indicate 'gaming' is occurring. Consider a simplified example* of an item receiving ratings of 100, 50, & 0. The mean average rating would be 50. However, ratings of 55, 50 & 45 could also result in the same average. The second average might be more trusted because there is more consensus around a particular rating (a lower deviation).
(*In practice, some albums can have several thousand ratings)
This album has a Bayesian average rating of 69.9/100, a mean average of 69.4/100, and a trimmed mean (excluding outliers) of 69.4/100. The standard deviation for this album is 14.3.

I love this album and I am grateful because it opened the door for me to T-Swift who is a really great songwriter.

Well I like it - and am playing it right now, for maybe the fourth time. And unusually (re others views here), had no idea before listening first time around that it was a cover album of covers, not being au fait with the work of ms taylor swift. So was genuine in giving this an honest shot, and it's a hit.

I understand why some would see this as a Taylor Swift cover album and not give this a chance. Don't do that. This is pretty solid and worth a listen. Besides, even though they are the same songs, it's such a different take that it commands respect for both Adams & Swift. That being said, I do like Swift's version better. Even if people disagree with me, she is underrated critically. So while I enjoyed this and respect it, and for certain people it will be an improvement, I would rather listen to the original.

No, but really, this is fucking shite. I love large parts of Adams' discography, and I just about tolerate parts of Swift's, but this is shameful. I don't need an hour-long "ironic ukulele YouTube cover" album.

On my first listen now, but the intimidate take away is how Adams made such a well known commercial success like "shake it off" totally his own. Really impressed.

Adams has recreated Swift's work to match a form I can appreciate. Not only is this a fantastic cover album, but one that has increased my respect for the the initial writer of the songs as well as the reconstructor.