So The Flies Don't Come (studio album) by Milo 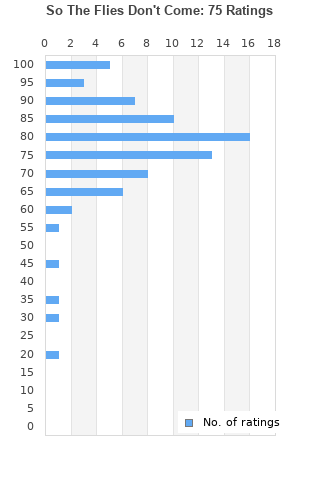 Sorry, no matches on eBay for "So The Flies Don't Come Milo".
See full search results on eBay

So The Flies Don't Come is ranked as the best album by Milo.

Listen to So The Flies Don't Come on YouTube 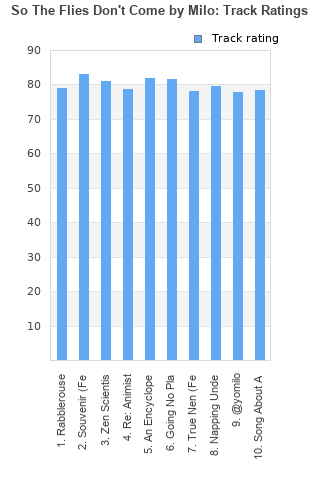 So The Flies Don't Come rankings

So The Flies Don't Come collection

So The Flies Don't Come ratings

Rating metrics: Outliers can be removed when calculating a mean average to dampen the effects of ratings outside the normal distribution. This figure is provided as the trimmed mean. A high standard deviation can be legitimate, but can sometimes indicate 'gaming' is occurring. Consider a simplified example* of an item receiving ratings of 100, 50, & 0. The mean average rating would be 50. However, ratings of 55, 50 & 45 could also result in the same average. The second average might be more trusted because there is more consensus around a particular rating (a lower deviation).
(*In practice, some albums can have several thousand ratings)
This album is rated in the top 4% of all albums on BestEverAlbums.com. This album has a Bayesian average rating of 77.6/100, a mean average of 76.8/100, and a trimmed mean (excluding outliers) of 78.2/100. The standard deviation for this album is 14.8.

So The Flies Don't Come favourites

So The Flies Don't Come comments

I love this. The lyrics are dark, provocative, and conscious. The beats are swirling and beautiful. There are some great songs in here, but the overall album structure leaves a little something to be desired.

I was never a fan of Milo's name-dropping, reference-for-the-sake-of-reference style (on display on Toothpaste Suburb), but this is entirely different. He's still spinning some pretty unique, quirky rhymes, but it sounds like there's a purpose behind it. Songs like Rabblerouse and An Encyclopedia, which is the album's highlight, have a conscious side, and even the artier tracks seem to have more weight behind them than anything I had heard from him before. I'm also a fan of short rap albums like this, because they tend to be wordy and dense, which I enjoy.

This man spits bars hard...needs to be higher in the overall

not bad, but not anywhere as good as A Toothpaste Suburb

Your feedback for So The Flies Don't Come