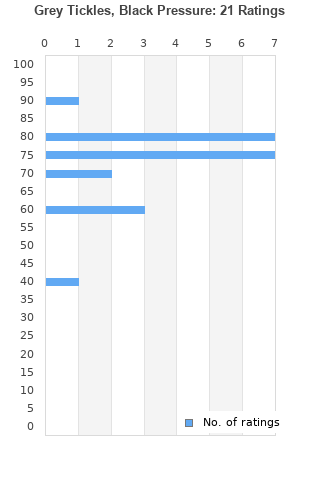 John Grant - Grey Tickles, Black Pressure [CD]
Condition: Brand New
Time left: 9h 32m 41s
Ships to: Worldwide
$17.56
Go to store
Product prices and availability are accurate as of the date indicated and are subject to change. Any price and availability information displayed on the linked website at the time of purchase will apply to the purchase of this product.  See full search results on eBay

Grey Tickles, Black Pressure is ranked 3rd best out of 5 albums by John Grant on BestEverAlbums.com.

The best album by John Grant is Queen Of Denmark which is ranked number 1490 in the list of all-time albums with a total rank score of 1,173. 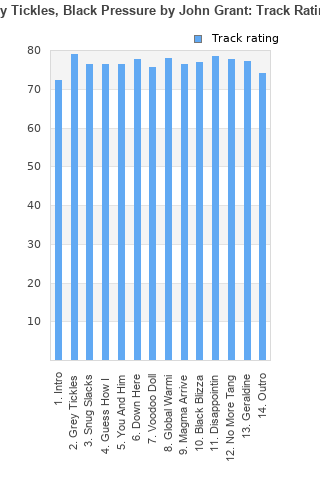 Rating metrics: Outliers can be removed when calculating a mean average to dampen the effects of ratings outside the normal distribution. This figure is provided as the trimmed mean. A high standard deviation can be legitimate, but can sometimes indicate 'gaming' is occurring. Consider a simplified example* of an item receiving ratings of 100, 50, & 0. The mean average rating would be 50. However, ratings of 55, 50 & 45 could also result in the same average. The second average might be more trusted because there is more consensus around a particular rating (a lower deviation).
(*In practice, some albums can have several thousand ratings)
This album has a Bayesian average rating of 73.0/100, a mean average of 73.0/100, and a trimmed mean (excluding outliers) of 73.0/100. The standard deviation for this album is 11.3.

Probably John Grant’s biggest strength is his way of making lyrics that would seem too comical or unfitting coming from other artists work really well in context, and this album is filled with them.

Similar to, pale green ghosts, but just as brilliant. Some great tracks but maybe Grant has taken the electronica sound to it's natural conclusion, time for a new sound. That's not taking anything away from this record, but I think a new direction would be the right course now.

The distinction between the synth-pop and classic rock is less obvious this time with Grant merging the two making for a hybrid-genre unique to him. The melancholy remains though with more songs about his infamous ex. However, does Joan Baez really make GG Allin look like Charlene Tilton?