The Documentary 2.5 (studio album) by The Game 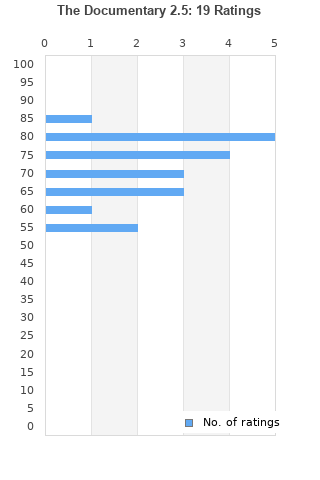 The Documentary 2.5 is ranked 8th best out of 13 albums by The Game on BestEverAlbums.com.

The best album by The Game is The Documentary which is ranked number 5999 in the list of all-time albums with a total rank score of 214. 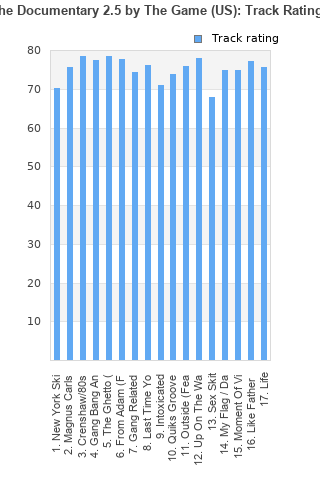 Rating metrics: Outliers can be removed when calculating a mean average to dampen the effects of ratings outside the normal distribution. This figure is provided as the trimmed mean. A high standard deviation can be legitimate, but can sometimes indicate 'gaming' is occurring. Consider a simplified example* of an item receiving ratings of 100, 50, & 0. The mean average rating would be 50. However, ratings of 55, 50 & 45 could also result in the same average. The second average might be more trusted because there is more consensus around a particular rating (a lower deviation).
(*In practice, some albums can have several thousand ratings)
This album has a Bayesian average rating of 72.3/100, a mean average of 71.9/100, and a trimmed mean (excluding outliers) of 71.9/100. The standard deviation for this album is 8.7.

a truly worth successor to it's predecessor.
the game sounded like he was hungry, and like he was enjoying himself. those two combined almost always create great music. great bars, production, and awesome features that fit well.
could have done without the intro skit and some at the end of songs, and iron flag and moment of violence, i could have done without. ending with like father like son 2/life was amazing.

Album starts off really good. The first five tracks after the intro are probably the best songs of the whole record. Too many fillers, and the skits get pretty annoying, which kind of kills some of the song's replay value.

There's a bonus track with Skrillex, 'El Chapo' that's worth checking out.

Your feedback for The Documentary 2.5