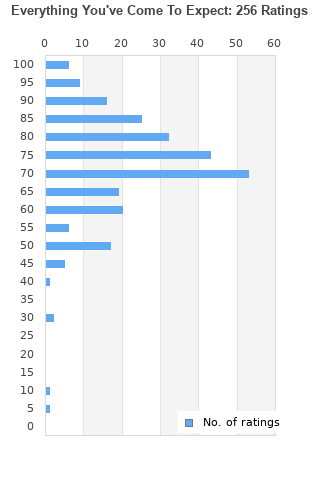 THE LAST SHADOW PUPPETS - EVERYTHING YOU'VE COME TO EXPECT [DELUXE EP EDITION] [
Condition: Very Good
Time left: 1d 2h 3m 34s
Ships to: Worldwide
$8.52
Go to store
Product prices and availability are accurate as of the date indicated and are subject to change. Any price and availability information displayed on the linked website at the time of purchase will apply to the purchase of this product.  See full search results on eBay

Everything You've Come To Expect is ranked 2nd best out of 4 albums by The Last Shadow Puppets on BestEverAlbums.com.

The best album by The Last Shadow Puppets is The Age Of The Understatement which is ranked number 1268 in the list of all-time albums with a total rank score of 1,446.

Listen to Everything You've Come To Expect on YouTube 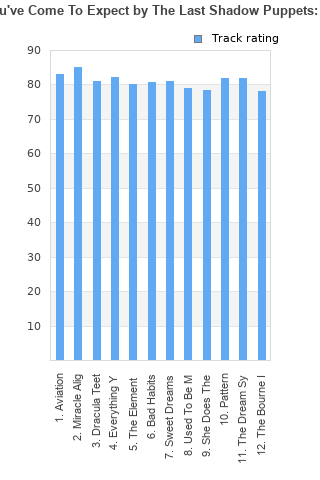 Everything You've Come To Expect rankings

Everything You've Come To Expect collection

Everything You've Come To Expect ratings

Rating metrics: Outliers can be removed when calculating a mean average to dampen the effects of ratings outside the normal distribution. This figure is provided as the trimmed mean. A high standard deviation can be legitimate, but can sometimes indicate 'gaming' is occurring. Consider a simplified example* of an item receiving ratings of 100, 50, & 0. The mean average rating would be 50. However, ratings of 55, 50 & 45 could also result in the same average. The second average might be more trusted because there is more consensus around a particular rating (a lower deviation).
(*In practice, some albums can have several thousand ratings)
This album has a Bayesian average rating of 72.4/100, a mean average of 71.8/100, and a trimmed mean (excluding outliers) of 72.3/100. The standard deviation for this album is 14.5.

Everything You've Come To Expect favourites

Everything You've Come To Expect comments

The album that, for me, confirms Alex Turner as the song writer of a generation. Not that Miles Kane isn't equally impressive; just listen to his voice on 'Pattern', so perfectly melodic against the foreboding tone of those strings and guitars. Everything You've Come To Expect is flawless, one of those records where everything slots in to place, drenched in self-absorbed love for its bluesy neo-60s sound and its tales of romantic escapades. The sultriness is as attractive as Kane and Turner are in their short-sleeved shirts and Clubmasters in the accompanying artwork. Some find it too snobby; I find the confidence in its own arrogance all the more reason to love it, and when it shows its heart on 'The Dream Synopsis', nothing else really compares.

It's been a nigh-on 5 year long romance, and I don't see it ending any time soon.

"The Dreams Synopsis" proves that first things first, Alex is a great lyricist, great lyricist. He has a personal style and the EYCTE vibe kind of reminds me of "Suck It and See".
Although yeah, this hasn't aged well, It hasn't got better with the years or anything. It is just a niche album for the fans of Alex songwriting style.

Is not a bad album , but I expected much better compared to the debut album ! Not worth 8 years of waiting

Having listened to this a few times now, it has really grown on me. This is a rather refreshing album with plenty of hints of 60s soft rock, but with a modern twist, as well as the excellent vocal work of Turner and Kane.

The overall sound of the album is really nice. A warm, full-bodied and detailed sound that fits well with all the songs on the album. The strings really add to this to differentiate it and give it an extra sense of drama.

Lyrically, the album is very strong. I really liked the nostalgic words of 'The Dream Synopsis' and the fast-paced, almost urgent feel of 'Aviation'. There's certainly a genuine and refined feel to the words of every song, and their delivery, as mentioned before, is really good.

One area that does lack is the structure. While there's no one song that genuinely feels out of place, the album jumps around in terms of pacing, and there were a number of points when songs didn't feel like they didn't belong one after the other.

Its other main weakness is that it does get a little on the boring side around the middle. Though every song is certainly distinguishable from the next, they lose the energy of the opening until 'Pattern' comes on. It means the album is fine to have on in the background, but tracks like 'Bad Habits' and 'She Does The Woods' aren't tempting enough to listen to on their own.

Overall though, I am suitably impressed. Turner is certainly best when he's with the Arctic Monkey's, but that's not to say he isn't at home with Kane. This is an interesting and well developed, if rather incohesive, side project that I will certainly be listening to for a while yet.

It's a bit boring. Only a few songs are really interesting (e.g. Bad Habits). Overall, it is not as good as the debut.

Honestly I'm quite disappointed with this album as a whole. I absolutely love the title track and Sweet Dreams, TN. The rest is just sort of eh for me, which is a shame. Let's hope the third in the trilogy can be as good as the first.

Some very nice songs here. The production is excellent and the pair's vocal techniques have improved vastly. The sound of their first album has been expanded to give a more all-encompassing homage to 1960s pop. Unfortunately, the record does not match what it has in style with substance. Three years on from AM, Turner carries on the theme of male lust only this time it feels sloppy and at odds with the album's more refined sound. The highlights are Aviation, Bad Habits and Everything You've Come To Expect.

Your feedback for Everything You've Come To Expect