Waking Up The Neighbours (studio album) by Bryan Adams 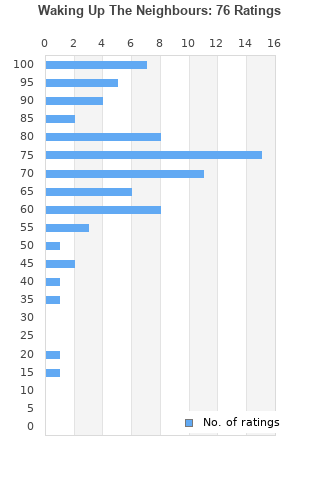 Bryan Adams / Waking Up The Neighbours
Condition: Good
Time left: 3h 47m 37s
Ships to: Worldwide
£1.00
Go to store
Product prices and availability are accurate as of the date indicated and are subject to change. Any price and availability information displayed on the linked website at the time of purchase will apply to the purchase of this product.  See full search results on eBay

Waking Up The Neighbours is ranked 2nd best out of 22 albums by Bryan Adams on BestEverAlbums.com.

The best album by Bryan Adams is Reckless which is ranked number 1521 in the list of all-time albums with a total rank score of 1,162. 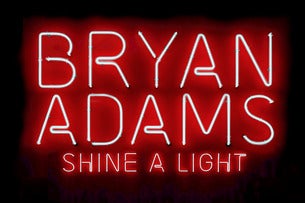 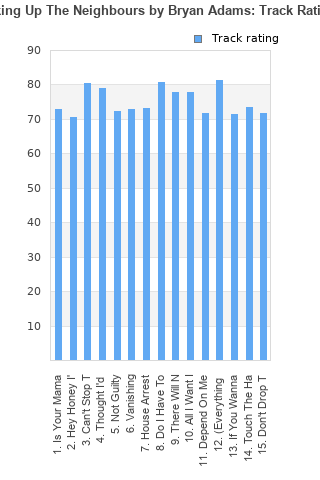 Waking Up The Neighbours rankings

Waking Up The Neighbours collection

Waking Up The Neighbours ratings

Rating metrics: Outliers can be removed when calculating a mean average to dampen the effects of ratings outside the normal distribution. This figure is provided as the trimmed mean. A high standard deviation can be legitimate, but can sometimes indicate 'gaming' is occurring. Consider a simplified example* of an item receiving ratings of 100, 50, & 0. The mean average rating would be 50. However, ratings of 55, 50 & 45 could also result in the same average. The second average might be more trusted because there is more consensus around a particular rating (a lower deviation).
(*In practice, some albums can have several thousand ratings)
This album has a Bayesian average rating of 72.8/100, a mean average of 71.9/100, and a trimmed mean (excluding outliers) of 72.7/100. The standard deviation for this album is 17.6.

Waking Up The Neighbours favourites

Waking Up The Neighbours comments

There was a time back in 1991 when a certain song broke all the records in the UK: It became the longest-ever consecutive stay #1, with an impressive record of 16 weeks.

Guess the song? yes, it was '(Everything I Do) I Do it For You'. At the time I was just a little kid. I was given the 'Waking Up The Neighbours' cassette and ever since I've spent some of the best days of my life with this album played on the background.

This album is intented to be enjoyed, not being over-analized on any way. And when you just put the CD and let the music flows, this album is phenomenal. In fact is my favourite Bryan Adams record ever.

It's really long (70+ min long!) but it has plenty of great tunes. 'Is Your Mama Gonna Miss Ya' has that Rolling Stones influence. The next 2 songs are pure rockers. 'Though I'd Died' is a slow song with a Def Leppard reminiscence (no wonder, the producer was Robert "Mutt" Lange, famous for working with Def Leppard, AC/DC and others).

My favourite other tracks are: 'House Arrest', 'Do I Have To Say The Words', 'Touch The Hand', 'Don't Drop That Bomb on Me' and of course that wonderful song with the longest staying at the top.

Pales in comparison to Reckless. Bryan Adams was well on his way to wallowing in soft-rock shmaltz.

Your feedback for Waking Up The Neighbours