The best album credited to Television is Marquee Moon which is ranked number 47 in the overall greatest album chart with a total rank score of 23,999.

Television is ranked number 97 in the overall artist rankings with a total rank score of 24,548.

The following albums by Television are ranked highest in the greatest album charts:

This may not be a complete discography for Television.This listing only shows those albums by this artist that appear in at least one chart on this site. If an album is 'missing' that you think deserves to be here, you can include it in your own chart from the My Charts page!

0
(from the album Television)
Show more
N.B. Tracks must have received at least 3 ratings to appear in the above list. 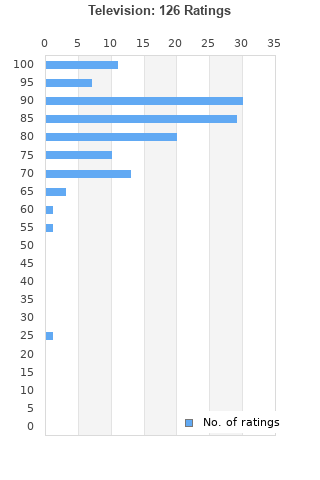 Rating metrics: Outliers can be removed when calculating a mean average to dampen the effects of ratings outside the normal distribution. This figure is provided as the trimmed mean. A high standard deviation can be legitimate, but can sometimes indicate 'gaming' is occurring. Consider a simplified example* of an item receiving ratings of 100, 50, & 0. The mean average rating would be 50. However, ratings of 55, 50 & 45 could also result in the same average. The second average might be more trusted because there is more consensus around a particular rating (a lower deviation).
(*In practice, some artists can have several thousand ratings)
This artist is rated in the top 1% of all artists on BestEverAlbums.com. This artist has a Bayesian average rating of 83.2/100, a mean average of 83.4/100, and a trimmed mean (excluding outliers) of 83.9/100. The standard deviation for this artist is 10.8.

For these ears, Marquee Moon ranks easily amongst the top 30 of all-time best rock/pop albums.

Across its eight songs, the songwriting is perfect, also the interplay of the two guitars, and the voice of Tom Verlaine.

Influences? Psychedelic jamming of classic guitar bands such as the Jefferson Airplane, Grateful Dead and Quicksilver, but with the raw energy of punk. And timeless songs.

Their second album "Adventure" also contains some great songs, but the overall level of intensity is a bit lower.

Then Television disbanded, Tom Verlaine pursuing an interesting solo career, but with only a few songs equaling those on Marquee Moon.

Marquee Moon and Adventure are both really great. Still, I think it's funny that one album is in the top fifty, and the rest are below 5,000.

If MARQUEE MOON were their only album, this band would receive at least a 90 from me. However, their follow-ups just didn't have the imagination, charm, and originality that the first attempt had.