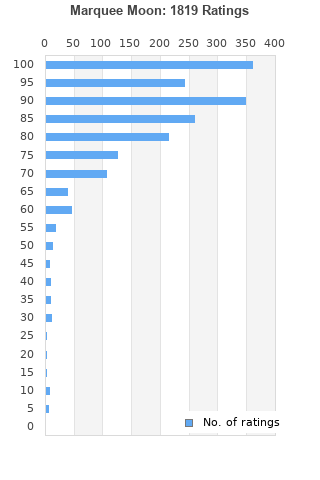 Marquee Moon is ranked as the best album by Television. 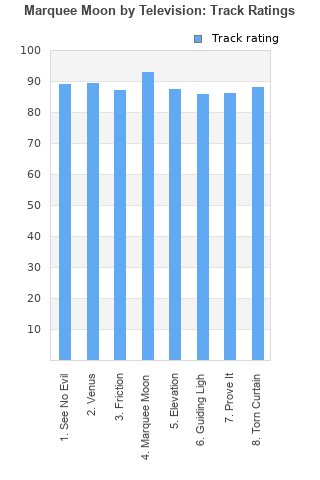 Rating metrics: Outliers can be removed when calculating a mean average to dampen the effects of ratings outside the normal distribution. This figure is provided as the trimmed mean. A high standard deviation can be legitimate, but can sometimes indicate 'gaming' is occurring. Consider a simplified example* of an item receiving ratings of 100, 50, & 0. The mean average rating would be 50. However, ratings of 55, 50 & 45 could also result in the same average. The second average might be more trusted because there is more consensus around a particular rating (a lower deviation).
(*In practice, some albums can have several thousand ratings)
This album is rated in the top 1% of all albums on BestEverAlbums.com. This album has a Bayesian average rating of 86.3/100, a mean average of 84.9/100, and a trimmed mean (excluding outliers) of 86.4/100. The standard deviation for this album is 14.9.

Probably the best album to come out of late 70s New York, so many great guitar moments on here. You can really hear the influence this had on the Strokes

Great album start to finish, there are no weak tracks and vocal delivery fits perfectly with post punk instrumentals.

The coolest, best and rawest post-punk album of all time. It is progressive and is performed with high quality and style.

A true classic album. Wish they had made more than they did.

Raw but inspired. Must have.

Roughly half of the songs are through the roof (first side of the album). 2nd half songs are generally too long and are marred by Verlaine’s grating voice.

8.50 out of 10.0
Oh, this rare album, man, is a jam from start to end. I love the origin of this band, too, CBGB. Right up there with the best Blondie and Talking Heads. Call it a lucky hit, but they beat The Clash right out of the dirty streets of New York. Not even my most desired album gets a 10.0!!

It is massively influential, and enjoyable to listen to. I think it's a little overrated if you take influence out of the equation, but solid either way.

Your feedback for Marquee Moon