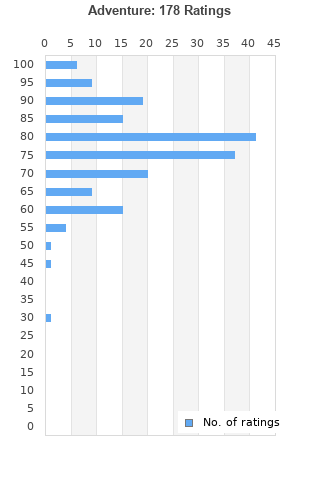 BUILD UR OWN Cassette Tapes Lot Soundtrack Movie Television Film Rare Titles
Condition: Very Good
Time left: 18h 41m 53s
Ships to: Worldwide
$7.98
Go to store
Product prices and availability are accurate as of the date indicated and are subject to change. Any price and availability information displayed on the linked website at the time of purchase will apply to the purchase of this product.  See full search results on eBay

Adventure is ranked 2nd best out of 4 albums by Television on BestEverAlbums.com.

The best album by Television is Marquee Moon which is ranked number 47 in the list of all-time albums with a total rank score of 25,824. 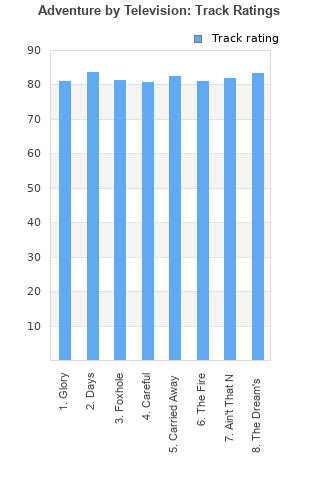 Rating metrics: Outliers can be removed when calculating a mean average to dampen the effects of ratings outside the normal distribution. This figure is provided as the trimmed mean. A high standard deviation can be legitimate, but can sometimes indicate 'gaming' is occurring. Consider a simplified example* of an item receiving ratings of 100, 50, & 0. The mean average rating would be 50. However, ratings of 55, 50 & 45 could also result in the same average. The second average might be more trusted because there is more consensus around a particular rating (a lower deviation).
(*In practice, some albums can have several thousand ratings)
This album is rated in the top 5% of all albums on BestEverAlbums.com. This album has a Bayesian average rating of 77.0/100, a mean average of 76.9/100, and a trimmed mean (excluding outliers) of 77.2/100. The standard deviation for this album is 11.2.

I agree with greatestlantern, the rating for this album is completely and utterly absurd considering that Marquee Moon is ranked 50th on the all-time list. Either Marquee Moon doesn't deserve to be that high or Adventure deserves to be a lot higher. But right now, I just can't understand how Adventure can be rated this low when it is so similar in terms of quality with Marquee Moon.

Maybe it's because it's too much similar to Marquee Moon? It's true that there seems to be a pattern here: 8 songs, a photo of the band on the cover and a lot of guitar solos in both albums. But come on, I don't buy it. On this website, if a band's first album is a masterpiece and the second is similar to the first, the second one also gets a great rating, even if it's a little lower (see The Strokes, Arctic Monkeys and many more examples).

Adventure is great, I even like it better than Marquee Moon, which is really great too. The guitar work is amazing on both albums, the songs are catchy and the level of musicianship is very high.

I think the real reason why this album is rated so low compared to Marquee Moon is because people haven't heard it. They listen to Marquee Moon because they have to and then they stop there because they are lead to believe by the rankings that it's the only good thing Television has done. Truth is, if you liked Marquee Moon, please don't stop there! Adventure is just as awesome, and even better in my opinion!

Days and The Fire would be my standout tracks.

This album's rating in here is absurd and deserve to be way too much higher. I agree marquee moon is better but definitely not that much, there is no reason for anyone not to love this album if they loved the first one. It has awesome tracks, it has great lyrics, it has beautiful solos, it has absolutely everything that the first one has.

Amazing album. "The fire" is one of the best songs ever written. Can't choose between this one and Marquee Moon.

Not close to being as good as Marquee Moon. I hated it at first but have grown to love it. Well worth a purchase.

Your feedback for Adventure