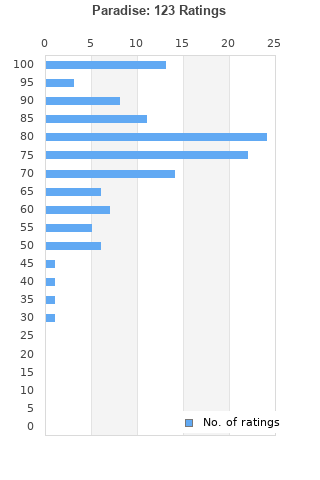 Lana Del Rey - Paradise - LP Vinyl - New
Condition: New
Time left: 6h 12m 43s
Ships to: Worldwide
£14.28
Go to store
Product prices and availability are accurate as of the date indicated and are subject to change. Any price and availability information displayed on the linked website at the time of purchase will apply to the purchase of this product.  See full search results on eBay

Paradise is ranked 6th best out of 8 albums by Lana Del Rey on BestEverAlbums.com.

The best album by Lana Del Rey is Born To Die which is ranked number 425 in the list of all-time albums with a total rank score of 4,601. 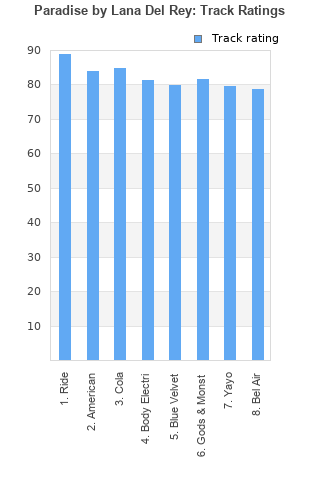 Rating metrics: Outliers can be removed when calculating a mean average to dampen the effects of ratings outside the normal distribution. This figure is provided as the trimmed mean. A high standard deviation can be legitimate, but can sometimes indicate 'gaming' is occurring. Consider a simplified example* of an item receiving ratings of 100, 50, & 0. The mean average rating would be 50. However, ratings of 55, 50 & 45 could also result in the same average. The second average might be more trusted because there is more consensus around a particular rating (a lower deviation).
(*In practice, some albums can have several thousand ratings)
This album is rated in the top 10% of all albums on BestEverAlbums.com. This album has a Bayesian average rating of 75.7/100, a mean average of 75.5/100, and a trimmed mean (excluding outliers) of 76.0/100. The standard deviation for this album is 14.9.

It is strange that this is considered as EP. It is more than 30 minutes long after all. "Reign in Blood" by Slayer is 29 minutes long and it is not even the shortest album of all-time. The Donnas made shorter with "American Teenage Rock N' Roll Machine".

However, this just amazing. It is like a sequel to "Born to Die" which was a smash success. "Body Eletrcic", "Cola", and "Bel Air" my favorite songs but overall this album is awesome with every song. A couple of songs may be very challenging.

A perfect EP offering some of her favorite songs. I suppose it could be considered a full album, clocking in at over 30 min. Seems sort of arbitrary that this wouldn't be a full length album but something with 6-8 tracks from the 60s/70s would

Your feedback for Paradise