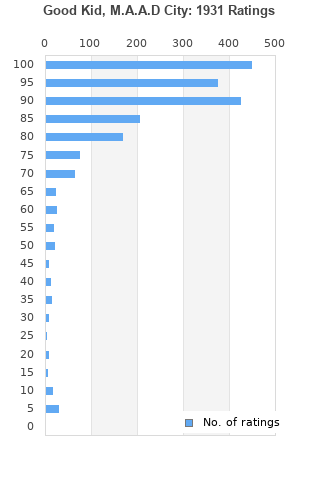 Good Kid, M.A.A.D City is ranked 2nd best out of 9 albums by Kendrick Lamar on BestEverAlbums.com.

The best album by Kendrick Lamar is To Pimp A Butterfly which is ranked number 20 in the list of all-time albums with a total rank score of 40,584. 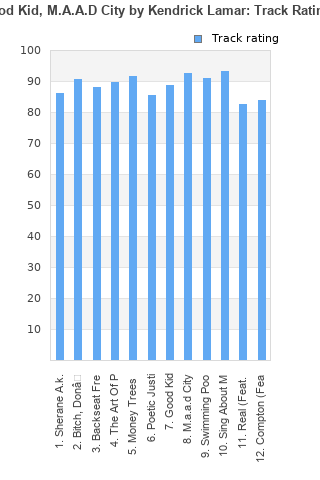 Rating metrics: Outliers can be removed when calculating a mean average to dampen the effects of ratings outside the normal distribution. This figure is provided as the trimmed mean. A high standard deviation can be legitimate, but can sometimes indicate 'gaming' is occurring. Consider a simplified example* of an item receiving ratings of 100, 50, & 0. The mean average rating would be 50. However, ratings of 55, 50 & 45 could also result in the same average. The second average might be more trusted because there is more consensus around a particular rating (a lower deviation).
(*In practice, some albums can have several thousand ratings)
This album is rated in the top 1% of all albums on BestEverAlbums.com. This album has a Bayesian average rating of 88.3/100, a mean average of 86.2/100, and a trimmed mean (excluding outliers) of 88.4/100. The standard deviation for this album is 17.8.

The story telling on display on this album is absolutely incredible and shows the start of Kendrick's dominance within the hip-hop genre.

I like this album for its vocal performance in like every way. The flow, rhythms of vocals and lyrics are all sick. Kendrick was hungry on this project and he really went for it. The album far as rap albums go is in the A tier list (the highest). Its a huge project with huge songs. I wish this album had more artistic creativity among its beats but its an arbitrary opinion. I would rank it higher if so. But its an album everybody loves for a reason. Between this, Illmatic, and Marshall Mathers LP, it's like the 3 best rap albums for flow. I listen to Illmatic, then GKMC, then MMLP in that order for the most listens, but in terms of quality of music, its tough

This is a difficult record to listen to. The rapping is amazing: lyrics, phrasing, storytelling. If you turn off your brain, this is an album that’s entertaining as it gets.

The point is, I can’t listen to this record without feeling despair who are caught in a dead end situation.

I don't think anybody is going to read this comment in a way where I can change their opinion, so I'd rather just speak to Kendrick's best song: Sing About Me. That track is the best rap track I think that has ever existed, from the musicality to the theatrics, the lyrics to the contour of the melody in the hook. It's a true masterpiece in every sense of the word.

I remember being a sophomore in high school and hearing ‘Bitch, Don’t Kill My Vibe’. I was instantly hooked on Kendrick’s flow and how unique his voice was was on the song. I wanted to hear more of what Kendrick had to offer.
I picked the cd up as soon as I could and I put it in my car. I can tell you, the cd did not get ejected from my car until I sold it at the end of high school.

This is is an album that literally changed my life, was the background music to my adolescent years. This is one of my all time favorite albums, and to see that so many people agree with me on this site is great to see.

An absolute must listen for those who love music.