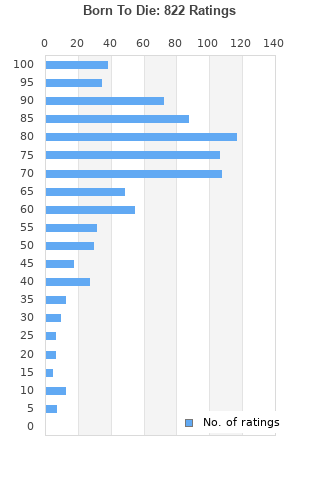 Born To Die is ranked 2nd best out of 10 albums by Lana Del Rey on BestEverAlbums.com.

The best album by Lana Del Rey is Norman Fucking Rockwell! which is ranked number 314 in the list of all-time albums with a total rank score of 6,064. 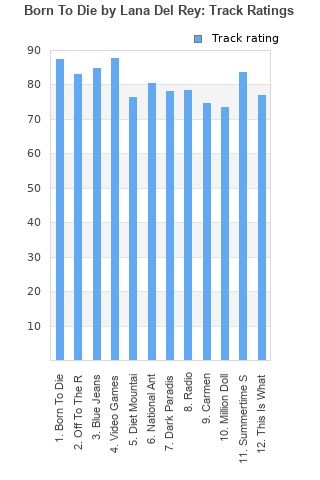 Rating metrics: Outliers can be removed when calculating a mean average to dampen the effects of ratings outside the normal distribution. This figure is provided as the trimmed mean. A high standard deviation can be legitimate, but can sometimes indicate 'gaming' is occurring. Consider a simplified example* of an item receiving ratings of 100, 50, & 0. The mean average rating would be 50. However, ratings of 55, 50 & 45 could also result in the same average. The second average might be more trusted because there is more consensus around a particular rating (a lower deviation).
(*In practice, some albums can have several thousand ratings)
This album has a Bayesian average rating of 72.0/100, a mean average of 70.5/100, and a trimmed mean (excluding outliers) of 72.0/100. The standard deviation for this album is 19.9.

Yeah. This is fake deep. I still enjoyed it though. I don't know what that says about me.

The main inspiration for the subgenre of sad pop (melancholic pop?), a subcategory of baroque pop I'd say. Strangely, I'd say it has been mixed with hip hop, since a lot of beats (the songs that do have beats) are boom bap on paper. People who do not intend to actively mix genres or evolve existing ones keep surprising me, while the people that put all effort in making something the critics will scratch their heads to keep boring me to death (cough* Joanna Newsom). And don't say they're comparable, 'cause following that logic even Moloko's late work can be held responsible for the sad pop wave in the early '10s, which would be ridiculous, and boils down to a logic that doesn't go deeper than "it's baroque pop plus a woman so it's the same", which might be followed by a condescending "everybody knows, it's the truth, kiss kiss".

In retrospect this album must be much more appreciated than its current position suggests. People at the time had no idea where Lana Del Rey would be going and what key position this album holds in single female singers' albums . This album will be remembered as a classic in due time.

This album is way underrated, should be in the top 200 at least! Once in a generation ultragorgeous voice!

Lana has that nostalgic vibe in her music that anyone can tell it's her. She took a path and went full on it. Wich It means If you don't like this type of thing, them It will never hit you. This is an debut from an artist that from the beggining knew what It wanted to be.

Every song seems to have its hook, but the personality of the artist and overall album is so grating.

This is a serious "love it or hate it" album. There has always been a distinct backlash. Whether it was the quick rise to popularity with "Video Games" or just Lana Del Rey's persona there is something that rubs people the wrong way. If you compare the track ratings to the album rating you can see it.

For me it all works. The merging of hip-hop instrumentation, lounge vocals, and the hyper-sexual character she's portraying creates a sound space that really hasn't existed since. It really reminds me of The Weeknd's early mixtapes in the way the character they portray makes you feel like you're listening to someone who's trajectory is aiming straight for the 27 club. Obviously that didn't happen so it so it might the lack of authenticity of using a persona that bothers people.

I never thought I'd say this but I do actually love this album ALTHOUGH it does take a massive nosedive in quality after Radio. Not to say the tracks that follow are bad. They just don't hold a candle to the first half. A lot of people don't like Lana Del Rey and I don't like any of her subsequent albums but her debut was solid.

Your feedback for Born To Die