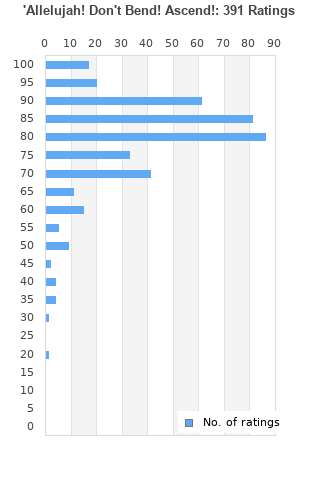 'Allelujah! Don't Bend! Ascend! is ranked 4th best out of 10 albums by Godspeed You! Black Emperor on BestEverAlbums.com.

The best album by Godspeed You! Black Emperor is Lift Yr. Skinny Fists Like Antennas To Heaven which is ranked number 87 in the list of all-time albums with a total rank score of 16,620. 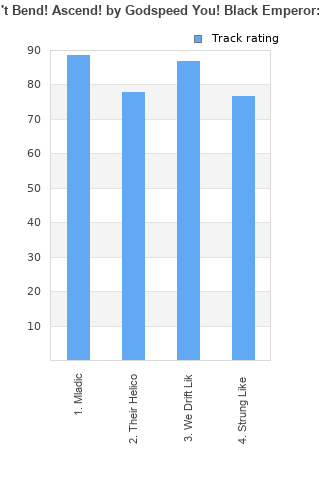 Rating metrics: Outliers can be removed when calculating a mean average to dampen the effects of ratings outside the normal distribution. This figure is provided as the trimmed mean. A high standard deviation can be legitimate, but can sometimes indicate 'gaming' is occurring. Consider a simplified example* of an item receiving ratings of 100, 50, & 0. The mean average rating would be 50. However, ratings of 55, 50 & 45 could also result in the same average. The second average might be more trusted because there is more consensus around a particular rating (a lower deviation).
(*In practice, some albums can have several thousand ratings)
This album is rated in the top 2% of all albums on BestEverAlbums.com. This album has a Bayesian average rating of 79.7/100, a mean average of 79.2/100, and a trimmed mean (excluding outliers) of 79.9/100. The standard deviation for this album is 13.1.

Side two is one of the best things to come out this year.

Something else indeed. Wonderful.

Just as good as LYSF and F#A#.., this one is not to be dismissed. Mladic might be my favorite Godspeed track

Mladic was amazing, the rest was OK

I don't expect these guys to ever surpass what they did on LYSFLATH, that would just be an unreasonable expectation. But I do think this is their second best.

That's what you call talent. They wouldn't be able to make a bad record even if they tried.

Love this. Different I think from their other stuff. Great comeback. Wish I could see them live! Love the way mladic builds from the spacemen3 jam then the bass kicks in and then that riff! Amazing production.

This entire album is instrumental and it’s post-rock at its absolute best. It’s tough to explain this album, it has almost immeasurable depth and breadth, like listening to a beautifully crafted symphony. If you’re familiar with the band Explosions In The Sky, then you’re familiar with this type of music. It is absolutely beautiful, the kind of music that you turn on loudly, lay down and meld into, losing yourself in the music. It’s amazing and I highly recommend it. It’s probably their best album since “Lift Your Skinny Fists Like Antennas To Heaven". There aren’t really highlights that I can list either, as this is an album that needs to be listened to all the way through, though I will say the first track, “Mladic", is absolutely amazing.