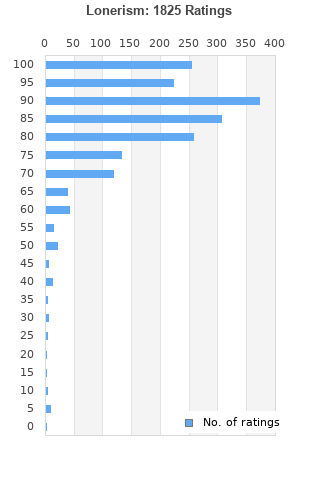 LONERISM
Condition: Brand New
Time left: 1d 4h 6m 36s
Ships to: Worldwide
$15.33
Go to store
Product prices and availability are accurate as of the date indicated and are subject to change. Any price and availability information displayed on the linked website at the time of purchase will apply to the purchase of this product.  See full search results on eBay

Lonerism is ranked as the best album by Tame Impala. 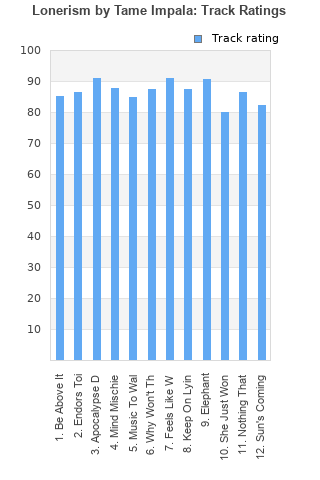 0
11.
Nothing That Has Happened So Far Has Been Anything We Could Control
Rating: 87 (405 votes)Comments:

Rating metrics: Outliers can be removed when calculating a mean average to dampen the effects of ratings outside the normal distribution. This figure is provided as the trimmed mean. A high standard deviation can be legitimate, but can sometimes indicate 'gaming' is occurring. Consider a simplified example* of an item receiving ratings of 100, 50, & 0. The mean average rating would be 50. However, ratings of 55, 50 & 45 could also result in the same average. The second average might be more trusted because there is more consensus around a particular rating (a lower deviation).
(*In practice, some albums can have several thousand ratings)
This album is rated in the top 1% of all albums on BestEverAlbums.com. This album has a Bayesian average rating of 85.0/100, a mean average of 83.9/100, and a trimmed mean (excluding outliers) of 85.1/100. The standard deviation for this album is 14.8.

Pleasant-enough lethargic overproduced pop with Lennon affectations drenched in acid rock effects. Couldn't take too much of it. Some critic called them the "Instagram of rock bands" and that's still their best description.

If you're looking for a trip (be it back in time or just a trip, it doesn't matter), this is the album.

The most immediate and gripping psychedelic music of the 2010s, blending pop melodys with 60s guitar riffs and modern synthesizers.

Best tracks:
- Endors Toi
- Apocalypse Dreams
- Mind Mischief
- Feels Like We Only Go Backwards
- Elephant
- Nothing That Has Happened So Far Has Been Anything We Could Control

Sounds a bit like The Beatles meet Indie Rock. I like it has good song to hear and here you can here the atmosphere that i like in the synthie mix and the guitar. I like the how the pitch is used to produce a pleasant area.

Fav. Tracks: Mind Mischief, Music To Walk Home By, Feels Like We Only Go Backwards, Keep on Lying, Elephant, Sun's Coming Up.

Hooked instantly right from the start with Be Above It. Sounds like Pink Floyd’s “Piper At The Gates Of Dawn” mixed with The Beatles “Revolver”, and some of his own sounds. One of the only good albums of the 2010s.

Brilliant follow up to Innerspeaker. From start to finish, best tracks are Elephant, Feels like we only go backwards and Apocalypse Dreams... Which is even better live!

Your feedback for Lonerism