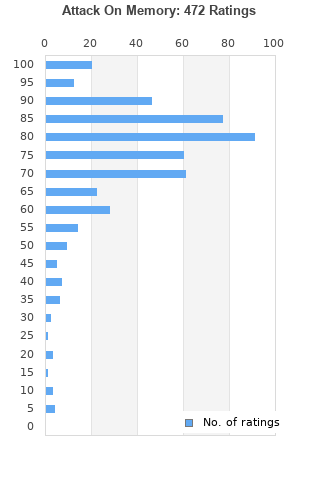 Attack On Memory is ranked as the best album by Cloud Nothings. 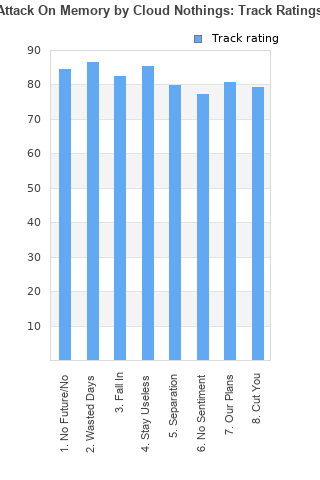 Rating metrics: Outliers can be removed when calculating a mean average to dampen the effects of ratings outside the normal distribution. This figure is provided as the trimmed mean. A high standard deviation can be legitimate, but can sometimes indicate 'gaming' is occurring. Consider a simplified example* of an item receiving ratings of 100, 50, & 0. The mean average rating would be 50. However, ratings of 55, 50 & 45 could also result in the same average. The second average might be more trusted because there is more consensus around a particular rating (a lower deviation).
(*In practice, some albums can have several thousand ratings)
This album is rated in the top 7% of all albums on BestEverAlbums.com. This album has a Bayesian average rating of 76.1/100, a mean average of 74.6/100, and a trimmed mean (excluding outliers) of 76.2/100. The standard deviation for this album is 16.8.

There is a lot of energy packed into this record and that creates some fantastic moments where you can get proper pumped up and just let the music take control of you. The best evidence of this is Stay Useless which never fails to get me motivated or give me a surge of energy. It is frantic with its riffs and drums which really gives you no time to think on the album and it is over before you even know it due to its crazy nature and short run time. However, the music is quite repetitive after a while and it does need to show a bit more of a flair. Tracks 6-8 do feel a lot weaker as well. Overall, a unique sound that is great to pump you up but struggles in terms of quality and experimentation.

Attack On Memory's attack on the nostalgia-filled reflections of the Dream Poppers has one fatal flaw: in that it sounds like a note for note homage to any of the post-grunge bands so prevalent after Nirvana's 91 breakthrough. Fans of Sebadoh, Archers of Loaf, and (Albini's) Shellac will find plenty to love here but the irony is knee-deep.

Good album. Definitely my favorite from Cloud Nothings. Their music seems a little too repetitious for my suiting, but still enjoyable.

The intensity and anger that comes from these songs pump me up like no other. If you see some kid hanging about with headphones in and shaking his feet and hands at a million miles a minute, it's me listening to this album.

The music seems interesting, but it's relatively unique sound is undercut by the absolute lack of variation and the unimaginative lyricism. It definitely has some good parts though.

Their artistic peak and also the consolidation of their sound. Fav tracks: Fall In, Stay Useless, Our Plans.

Post Hardcore sound of this album is quite raw. Its more political too.

I think there are interesting things on this album, especially some guitar riffs. But vocals really spoil the hole thing, to the point of being completely unbearable at times. Too bad.

Your feedback for Attack On Memory