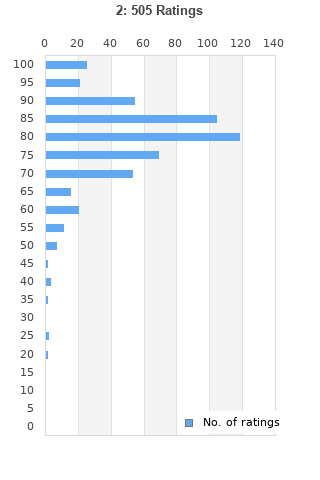 2 is ranked 2nd best out of 13 albums by Mac DeMarco on BestEverAlbums.com.

The best album by Mac DeMarco is Salad Days which is ranked number 447 in the list of all-time albums with a total rank score of 4,247. 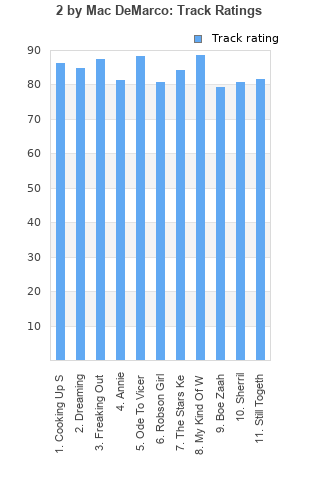 Freaking Out The Neighborhood
Rating: 88 (128 votes)Comments:

Rating metrics: Outliers can be removed when calculating a mean average to dampen the effects of ratings outside the normal distribution. This figure is provided as the trimmed mean. A high standard deviation can be legitimate, but can sometimes indicate 'gaming' is occurring. Consider a simplified example* of an item receiving ratings of 100, 50, & 0. The mean average rating would be 50. However, ratings of 55, 50 & 45 could also result in the same average. The second average might be more trusted because there is more consensus around a particular rating (a lower deviation).
(*In practice, some albums can have several thousand ratings)
This album is rated in the top 2% of all albums on BestEverAlbums.com. This album has a Bayesian average rating of 79.6/100, a mean average of 79.2/100, and a trimmed mean (excluding outliers) of 79.7/100. The standard deviation for this album is 11.9.

Some more great stuff from Mac, although it's not as good as Salad Days and This Old Dog. Highlights are Freaking out the Neighbourhood, Still Together and The Stars Keep On Calling My Name. A very easy listen.

I like psychedelic freak-outs, but Annie's is just grating and almost wrecks what would have been another brilliant song. I wish Still Together was turned into a proper song too. Sounds like tacked-on left-overs Mac couldn't quite figure out how to turn into a properly produced track like the rest. As a result the vocals are again, a little grating, and it's really dull.

Otherwise? This album is absolutely fantastic. There are two low-points among some of the best music I've ever heard. They're the only thing keeping this album from a 10, in my opinion.

Freaking Out the Neighborhood, Ode to Viceroy and My Kind of Woman are just fantastic

I sometimes kick myself for not buying this cd when I had a chance. This album really grows on you, and as it does, you really come to appreciate the skill that goes into slacker rock. I only hope that soon people will do the same for Courtney Barnett!

In my opinion the most prolific musician currently making music. This album is perfect through and through and if you haven't listened to it yet, do yourself a favor and take a listen. Currently somewhat overlooked and underrated, but if you've listened to it as much as I have, you can see there's something so incredibly unique that exists within the eclectic mix of genres (some glam-rock, post-punk, pop) he's cultivated. I can't exactly put my finger on it, so I like to call it "maplerock." There are some other Canadian bands associated with him that I also define as maplerock such as Homeshake, Freelove Fenner, Each Other, Alex Calder, that are also worth checking out.