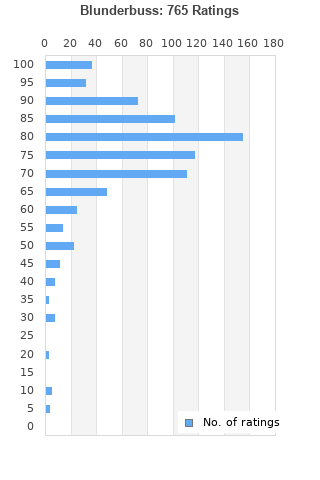 Blunderbuss is ranked as the best album by Jack White. 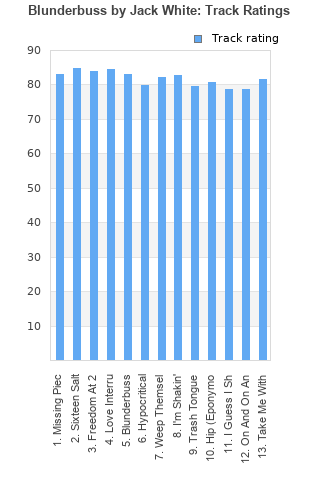 Rating metrics: Outliers can be removed when calculating a mean average to dampen the effects of ratings outside the normal distribution. This figure is provided as the trimmed mean. A high standard deviation can be legitimate, but can sometimes indicate 'gaming' is occurring. Consider a simplified example* of an item receiving ratings of 100, 50, & 0. The mean average rating would be 50. However, ratings of 55, 50 & 45 could also result in the same average. The second average might be more trusted because there is more consensus around a particular rating (a lower deviation).
(*In practice, some albums can have several thousand ratings)
This album is rated in the top 4% of all albums on BestEverAlbums.com. This album has a Bayesian average rating of 77.0/100, a mean average of 75.8/100, and a trimmed mean (excluding outliers) of 77.1/100. The standard deviation for this album is 15.1.

An inconsistent listen with some fantastic songs that are let down by some below average tracks that really disrupt the flow of the record. When the music is good it is amazing with some songs being so enjoyable to listen to and their short style means that no song overstays its welcome. This is most effective on Love Interruption and Sixteen Saltines which are also the two best songs on the album for me. Side 1 is the peak of the album with most songs on here being at least good and all of them are catchy and fun. Where the record struggles is the closer you get to the conclusion as it begins to drag and the quality takes a dive. The last 3 songs feel so elongated compared to the rest of the record and could really be cut and the music would be superior. Overall, if there were a few cuts on this album then it would be great but unfortunately it is dragged down by the ending.

I have listened to this album about 10 times and enjoy it at the time - and there are some smashing songs on here - but somehow it still hasn't really seeped into me and sounds like I am listening to it the first time. I want to return to albums and feel like they are an old friend but so far this is just someone I've met a few times and they are alright.

Little uneven but very listenable. I would like to hear more guitar and some solos too. I do not understand why those solos are avoided?

Solid album. Never was a fan of the White Stripes, but I enjoyed this.

Solid album that keeps Jack White in the comfort zone that we're used to while also exploring other areas. It is a bit front loaded though.

A solid album, although I haven't played it in a long while

Your feedback for Blunderbuss