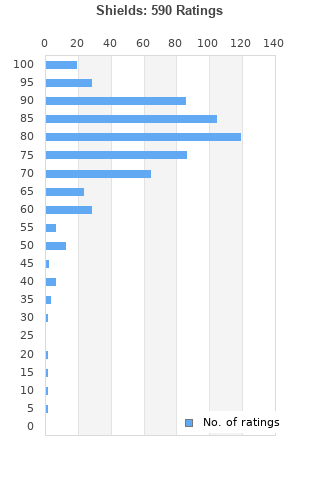 Shields is ranked 2nd best out of 9 albums by Grizzly Bear on BestEverAlbums.com.

The best album by Grizzly Bear is Veckatimest which is ranked number 393 in the list of all-time albums with a total rank score of 4,819. 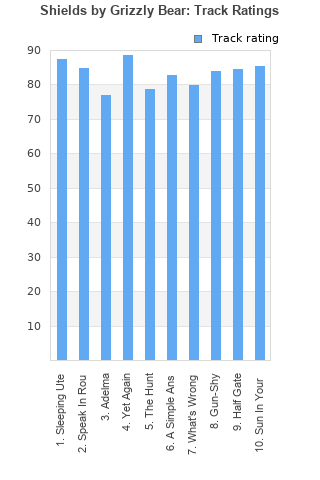 Rating metrics: Outliers can be removed when calculating a mean average to dampen the effects of ratings outside the normal distribution. This figure is provided as the trimmed mean. A high standard deviation can be legitimate, but can sometimes indicate 'gaming' is occurring. Consider a simplified example* of an item receiving ratings of 100, 50, & 0. The mean average rating would be 50. However, ratings of 55, 50 & 45 could also result in the same average. The second average might be more trusted because there is more consensus around a particular rating (a lower deviation).
(*In practice, some albums can have several thousand ratings)
This album is rated in the top 2% of all albums on BestEverAlbums.com. This album has a Bayesian average rating of 78.8/100, a mean average of 78.1/100, and a trimmed mean (excluding outliers) of 78.9/100. The standard deviation for this album is 13.2.

By far my favorite album of theirs, there's just so much depth here. The way they play with the notions of light and illusion as a metaphor for the overarching theme of relationships is entirely unique and the culmination of this trope in the final track is brilliant and creates a real moment of clarity. Brilliant lyrically and musically, I cannot recommend this album enough.

Although I prefer Veckatimest just a marginal fraction more, this - in terms of quality - is every bits equal. It's essentially the same formula except this time around they have an eye for more expressive lyrics and ambient details (an aspect not picked up on first listen). Just when I thought they couldn't get more tumultuous, they release this.

To me it's very interesting to see people rank Veckatimest above this, though I'm not surprised Yellow House is seen as better by some. To me, Yellow House captures something conceptually that the other albums don't - I feel like Veckatimest is more accessible, even thogh it took me longer to acclimatise to! Despite this, Shields's most exciting track, Sun In Your Eyes, is the most memorable song to me. The difference between this album and Horn Of Plenty, in my opinion, is an indicator that perhaps they could take some more risks to make their music more fun.

I dunno. I was trying to write something that put shields above Veckatimest and below Yellow House, but I can't quite explain why I'm not such a big fan of Veck. Shrug! :)

Another great album from Grizzly bear, although I don't think it's quite as good as, yellow house, or, veckatamist. Still, it's another strong record, but I hope they head in a slightly different direction on their next release.

Another Grizzly Bear monster album! An understated American band who have put out some very well received discs these last few years. Will be interesting to hear their next effort!

Accessible and structured compared to Vecktiamest, but not necessarily for the better. Still a great album, but lacks some of the sheer beauty.

I enjoy this album slighter more than Veckatimest. But both albums are rather good.

This albums moves me everything I hear from the first tones "Sleeping Ute". This is an album of pure beauty. Will have to check out other albums as well if some claim the Veckatimest is better.

Instant crush on this album as far I'm concerned. Of course all songs do not reach the beauty of "Yet Again", but still one of the best records of 2012.

Your feedback for Shields