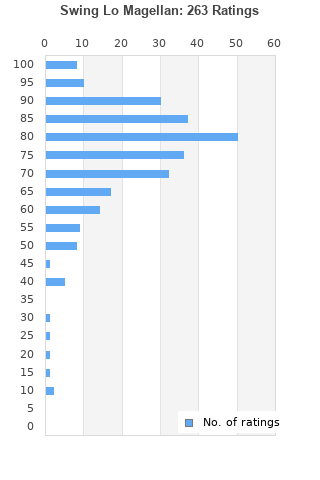 Swing Lo Magellan is ranked 2nd best out of 11 albums by Dirty Projectors on BestEverAlbums.com.

The best album by Dirty Projectors is Bitte Orca which is ranked number 813 in the list of all-time albums with a total rank score of 2,278.

Dead vs. Phish: Shred is Dead & The Lizards
The Queen, Wilmington, United States. 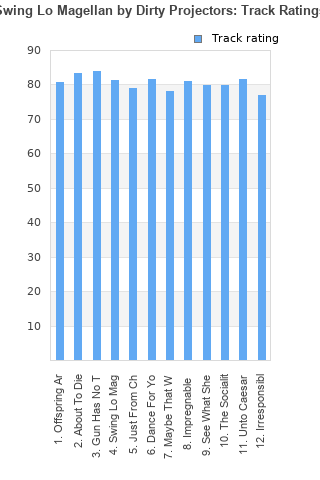 Rating metrics: Outliers can be removed when calculating a mean average to dampen the effects of ratings outside the normal distribution. This figure is provided as the trimmed mean. A high standard deviation can be legitimate, but can sometimes indicate 'gaming' is occurring. Consider a simplified example* of an item receiving ratings of 100, 50, & 0. The mean average rating would be 50. However, ratings of 55, 50 & 45 could also result in the same average. The second average might be more trusted because there is more consensus around a particular rating (a lower deviation).
(*In practice, some albums can have several thousand ratings)
This album is rated in the top 6% of all albums on BestEverAlbums.com. This album has a Bayesian average rating of 76.3/100, a mean average of 75.3/100, and a trimmed mean (excluding outliers) of 76.4/100. The standard deviation for this album is 15.1.

It sacrifices some of the experimentation with song construction that was seen on Bitte Orca in an attempt to be more accessible and it succeeds fantastically. Some absolutely brilliant tunes on here that still manage to innovate with reckless abandon.

So much charm, so much creativity and really cool sounds. However, this keeps me wanting more. Something about this album frustrates me - like this band is so close to really grabbing me, but leaves me hanging instead.

This album sets the bar very high since it's a really sophisticated and complex way of doing pop music.
Its highlights are the energic choral hip-hop/rock anthem Offspring Are Blank, the childish but eccentric Dance For You and the retro hypnotic Maybe That Was It.
Along the way you don't find anything but very good quality music.

I guess that people in the future will notice this one.

Didn't like this as much as Bitte Orca the first couple of times but I'm definitely warming to it. There's a bit more indie and a bit less prog in the mix. Make no mistake though, Dirty Projector are still hell bent on breaking the mold wherever possible. I've just been listening on headphones and the stereo imaging is bat shit insane. Instruments are regularly panned hard left and hard right, to extremely disorienting effect.

Really starting to warm up to this record more-so than Bitte Orca. Whilst Longstreth retains his seemingly throat-straining vocals and the background female harmonies remain, Swing Lo Magellan differs much from it's predecessor in the sense that it sounds as though the band aren't focusing too heavily on being intentionally difficult (or seeming to otherwise). This album is a far more minimalized and pop-influenced effort (don't get too excited just yet), with also just a hint of country. The strongest tracks in my opinion are those that represent the more minimal sound, such as Impregnable Question (a sweet folksy/country love song) and the Socialites (Amber Coffman's beautiful voice over childishly-fun guitar picking and ambient production). Dirty Projectors may not have fully reinvented their sound but one should never fully expect that when it comes to listening to a band as unpredictable as this (don't call them Indie Rock!!!!)
7.5-8/10

Gun has no trigger is by far the best song on this one.

Unexpectedly, a very solid album with some great songs inside.

I’m going to go ahead and say that this album is one of, if not the best album that Dirty Projectors have released yet. It’s very beat focused, the very first song has a beat that you’d expect to hear in a Lil’ Wayne song (coincidentally, Dave Longstreth has said that, among others, Lil’ Wayne was an influence on this album) but there’s indie rock all around it. This album shakes a little, wobbles almost into disconnect, but brings you right back to where you want to be. Not only is it enjoyable to listen to, but it’s interesting, it’s intriguing. You keep listening wondering where they’re going to go next, how they’re going to take the disconnect that you’re listening to and make it coherent, and for the most part, they do it very well. Definitely an album worth checking out.

Your feedback for Swing Lo Magellan