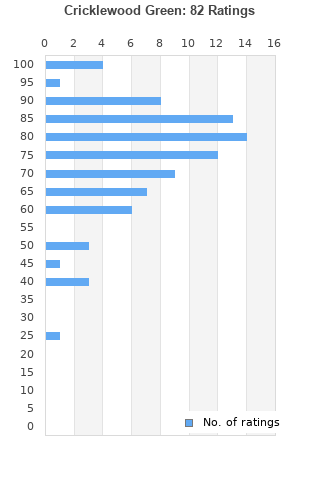 Cricklewood Green is ranked as the best album by Ten Years After. 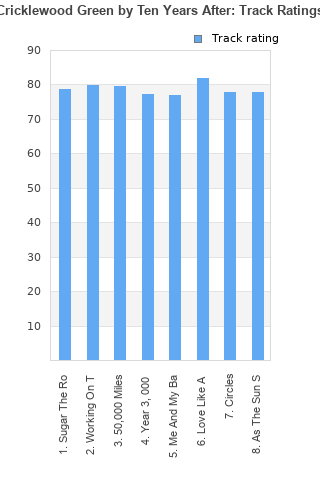 Rating metrics: Outliers can be removed when calculating a mean average to dampen the effects of ratings outside the normal distribution. This figure is provided as the trimmed mean. A high standard deviation can be legitimate, but can sometimes indicate 'gaming' is occurring. Consider a simplified example* of an item receiving ratings of 100, 50, & 0. The mean average rating would be 50. However, ratings of 55, 50 & 45 could also result in the same average. The second average might be more trusted because there is more consensus around a particular rating (a lower deviation).
(*In practice, some albums can have several thousand ratings)
This album is rated in the top 11% of all albums on BestEverAlbums.com. This album has a Bayesian average rating of 75.4/100, a mean average of 75.1/100, and a trimmed mean (excluding outliers) of 75.7/100. The standard deviation for this album is 14.9.

I have always dug TYA, and this album is a perfect rendition of the multitude of possibilities of capable musicians to create a diverse album without being goofy. Sadly Alvin joined the upstairs band way to early, he is sorely missed.

This TYE release starts to step outside the lively blues-rock corner they more-or-less painted themselves in, but doesn't go far enough. This group can't help but fall back on their repetitive, jamming sound, and it holds them back from more signature songs and releases.

If this isn't quite your cup of tea, I'd suggest checking out 'A Space In Time' - the group's biggest commercial success. If this IS your jam, check out Shhh, Watt, and the rest of the TYE catalogue - there's much more where Cricklewood Green's sound came from.

I think this is their most consistent album - every track is either good or great. Undead, Stonedhenge, Ssshh, Watt and R'n'R' music to the world aren't far behind though.

I really don't get how this can be the top TYA's album here. Maybe because of the hit "Love Like a Man"? It's not bad, but it's very hard rock oriented, has less of the typical TYA's style (jazzy rhythms, dark bluesy feel), and still Ssssh (which is also quite hard rock oriented) has more memorable riffs, bass lines and vocals.

Your feedback for Cricklewood Green