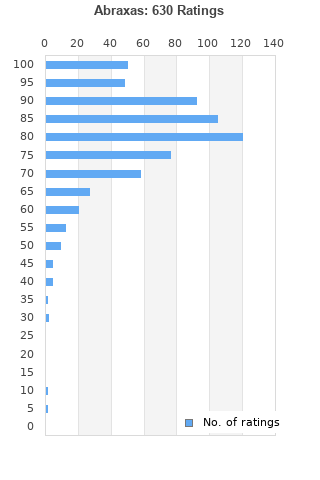 Abraxas is ranked as the best album by Santana. 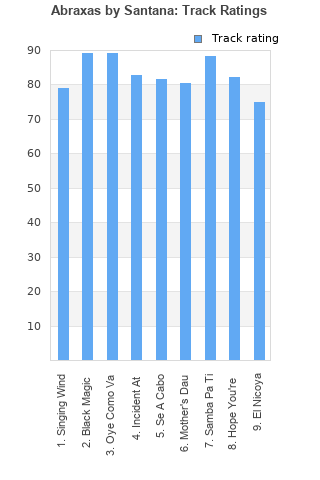 Rating metrics: Outliers can be removed when calculating a mean average to dampen the effects of ratings outside the normal distribution. This figure is provided as the trimmed mean. A high standard deviation can be legitimate, but can sometimes indicate 'gaming' is occurring. Consider a simplified example* of an item receiving ratings of 100, 50, & 0. The mean average rating would be 50. However, ratings of 55, 50 & 45 could also result in the same average. The second average might be more trusted because there is more consensus around a particular rating (a lower deviation).
(*In practice, some albums can have several thousand ratings)
This album is rated in the top 1% of all albums on BestEverAlbums.com. This album has a Bayesian average rating of 81.1/100, a mean average of 80.5/100, and a trimmed mean (excluding outliers) of 81.3/100. The standard deviation for this album is 13.3.

I enjoyed it more than his first album, but I think his music is just not for me. I have to say that Black Magic Woman and Oye Como Va are catchy.

498 in overall chart? what did Santana do to be so undervalued; this, and at least other 5 albums of his dischography, i considerate at least closed to be masterpieces.

One of my most listened album, cohesive and artistically rewarding experience.
Full of great songs

2 blockbusters plus some great music

Overall, I prefer my Santana live, but this is mostly smoldering. Even the slowdown is top-shelf.

Turns out that after going through two crates three times each, I still happened to miss this album and My Aim is True. I am an idiot. A happy idiot, but still an idiot.
Edit: IT WAS FUCKING SANTANA SANTANA IN AN ABRAXAS SLEEVE THIS IS SO FUUNNNYYY

One of my favorite albums of all time, not a weak track to avoid. Carlos is at his creative peak and the percussion is measured and not over indulging. Would love the release of an official live document from that period. It would be all downhill from there. Santana III is all over the place and then Rolie and Schon left and Santana never had a decent vocalist again. I know that Carlos is an icon and he deserves the recognition, but Abraxas remains his master piece.

Superb album in parts sounding like a spiced up Pink Floyd! In my humble opinion this is Progressive Rock with a Latin influence. Vocals remind me of some of the early Traffic output in places. 'Hope You're Feeling Better' is a personal favourite, full of rockin energy.

Black Magic Woman is simply one of my favorite songs from the 70s! What a way to kick of the decade Santana!

Your feedback for Abraxas