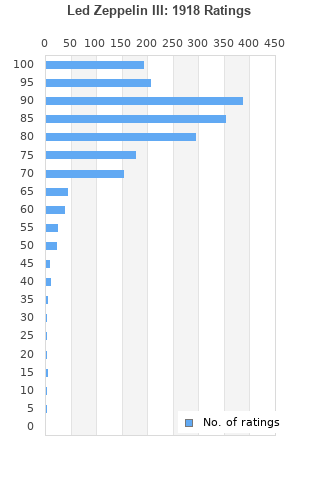 Led Zeppelin III is ranked 6th best out of 22 albums by Led Zeppelin on BestEverAlbums.com.

The best album by Led Zeppelin is Untitled (Led Zeppelin IV) which is ranked number 11 in the list of all-time albums with a total rank score of 52,053. 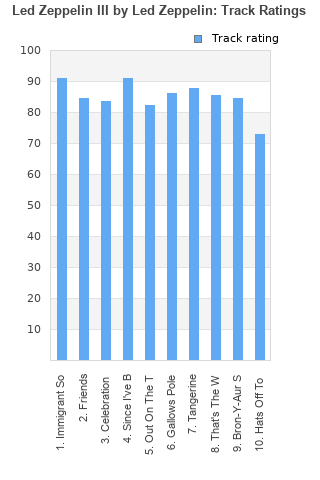 Rating metrics: Outliers can be removed when calculating a mean average to dampen the effects of ratings outside the normal distribution. This figure is provided as the trimmed mean. A high standard deviation can be legitimate, but can sometimes indicate 'gaming' is occurring. Consider a simplified example* of an item receiving ratings of 100, 50, & 0. The mean average rating would be 50. However, ratings of 55, 50 & 45 could also result in the same average. The second average might be more trusted because there is more consensus around a particular rating (a lower deviation).
(*In practice, some albums can have several thousand ratings)
This album is rated in the top 1% of all albums on BestEverAlbums.com. This album has a Bayesian average rating of 83.7/100, a mean average of 83.0/100, and a trimmed mean (excluding outliers) of 83.7/100. The standard deviation for this album is 12.8.

Near perfect Led Zeppelin album, diversed and quite consistent only the last track is bad in my opinion.

My second favourite Led Zep album. Probably their most consistent. The last 2 tracks are the weakest by far and drag the rating down a bit for me. If it was just 8 tracks I'd probably put it above Led Zeppelin IV. My highlights are Out On The Tiles, That's the Way and Immigrant Song.

this album has one low point, "hats off to harper". the rest of the album is incredible, and in my opinion is comparable to IV and II

A bit of a preview of what was to come as the album contains pretty much all the genres the band would include on later releases. There's heavy rock- Immigrant Song eastern mysticism- Friends pop- Celebration Day and some beautiful ballads especially That's the Way with Page's sublime dobro accompaniment. Page's guitar is all over brilliant here but in particular on the extended electric blues of Since I've been Loving You and the off the charts acoustic slide of the terrifying Hats off to Harper. Their 3rd best album.

Hard to pick a favorite Zep album, but this one has always held a spot at the top for me. It's the most different from all the others being pretty much there 'folk' album. Love it and it's never grown old

Your feedback for Led Zeppelin III