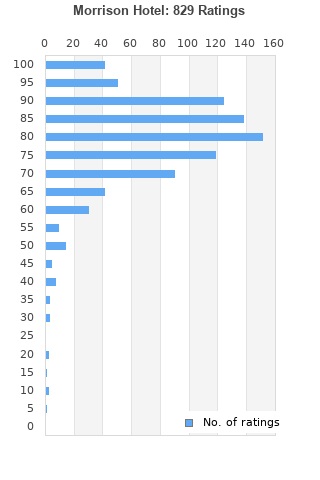 Morrison Hotel is ranked 4th best out of 43 albums by The Doors on BestEverAlbums.com.

The best album by The Doors is The Doors which is ranked number 30 in the list of all-time albums with a total rank score of 33,437. 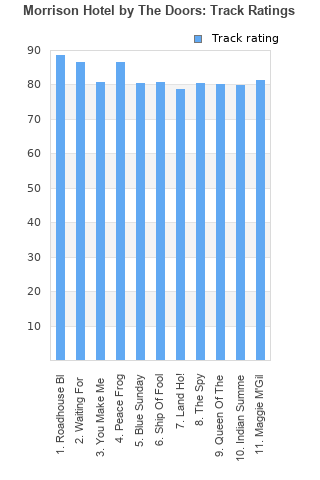 Rating metrics: Outliers can be removed when calculating a mean average to dampen the effects of ratings outside the normal distribution. This figure is provided as the trimmed mean. A high standard deviation can be legitimate, but can sometimes indicate 'gaming' is occurring. Consider a simplified example* of an item receiving ratings of 100, 50, & 0. The mean average rating would be 50. However, ratings of 55, 50 & 45 could also result in the same average. The second average might be more trusted because there is more consensus around a particular rating (a lower deviation).
(*In practice, some albums can have several thousand ratings)
This album is rated in the top 2% of all albums on BestEverAlbums.com. This album has a Bayesian average rating of 79.8/100, a mean average of 79.1/100, and a trimmed mean (excluding outliers) of 79.9/100. The standard deviation for this album is 13.2.

3rd best album by The Doors. Very underrated in my opinion.

Almost a perfect album, but the final song just ruins it for me. A great departure from their original sound, but a great album nonetheless.

Only one song I rated below a 9.5... this album is insanely good. I'm trying to be realistic but I can't. It's just amazing.

Maybe my 2nd favorite right after L.A. Woman. I do think that Hard Rock Cafe (side A) is better than Morrison Hotel (side B), but both are pretty damn strong. Highlights would be: "Roadhouse Blues", "Waiting For the Sun", "Peace Frog", "Ship of Fools", "Queen of the Highway", and "Maggie M'gill". Yep, that's a lot of highlights.

Great album !! Not their most cohesive, but great tracks throughout the record.

Standouts: Waiting for the Sun, Peace Frog, Queen of the Highway

The Doors kick off the 70s with a slight reinvention, promoting their blues forays, and rolling back the psychedelia, the poet Morrison takes a back seat to the rock Morrison, though he still shows up occasionally. Its not original or ground-breaking but its a nice change of pace after the disaster of their last album, and shows they still had something to say.

Your feedback for Morrison Hotel