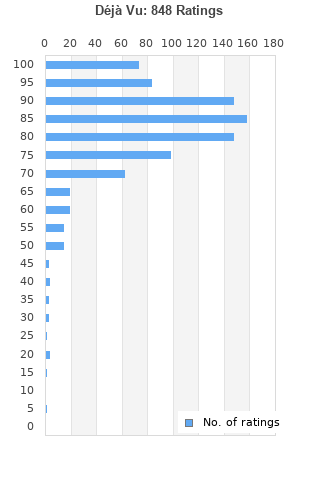 Déjà Vu is ranked as the best album by Crosby, Stills, Nash & Young. 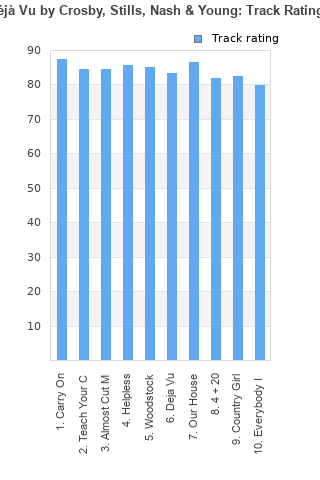 Rating metrics: Outliers can be removed when calculating a mean average to dampen the effects of ratings outside the normal distribution. This figure is provided as the trimmed mean. A high standard deviation can be legitimate, but can sometimes indicate 'gaming' is occurring. Consider a simplified example* of an item receiving ratings of 100, 50, & 0. The mean average rating would be 50. However, ratings of 55, 50 & 45 could also result in the same average. The second average might be more trusted because there is more consensus around a particular rating (a lower deviation).
(*In practice, some albums can have several thousand ratings)
This album is rated in the top 1% of all albums on BestEverAlbums.com. This album has a Bayesian average rating of 82.6/100, a mean average of 81.8/100, and a trimmed mean (excluding outliers) of 82.7/100. The standard deviation for this album is 13.3.

Neil Young brings a lot of greatness to this group and I quite enjoyed this album it has a couple really good highlights.

Can see why they never scored a hit from this album in the U.K. The Hollies and The Byrds were excellent, but this goes from folk to rock and back again, resulting in a mess. Only decent tracks "Carry on", "Almost cut my hair", and "Our house". The rest very low par.

A strong improvement over the also solid debut album coming with the addition of Neil Young. Deja Vu is stacked with great tracks. I don't think there's a song worthy of a skip on this record and there are a handful of tracks that are bonafide classics. Its an essential listen.

A definitive album and natural evolution from the CSN debut with stellar performances from all involved. I consider this a classic for the era and the most cohesive release that any combination of CSNY members ever put out.

the harmonies, musicianship, songwriting, topical lyrics results in a masterpiece.

Feels more like a compilation than an album, both in a good (every song is above average, I find it hard to spot a weak link) and a bad (a collection of stand-alone tracks without enough unifying factors) way.

B-side tries hard, but can't quite keep up with the 100-level A-side.

Your feedback for Déjà Vu