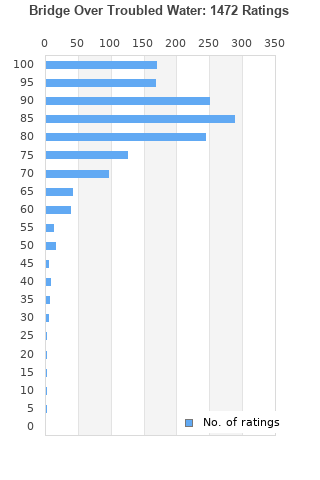 Paul Simon And Garfunkel Bridge Over Troubled Water In Original 1970 Shrink 9914
Condition: Used
Time left: 3h 15m 6s
Ships to: Worldwide
$10.00
Go to store
Product prices and availability are accurate as of the date indicated and are subject to change. Any price and availability information displayed on the linked website at the time of purchase will apply to the purchase of this product.  See full search results on eBay

Bridge Over Troubled Water is ranked as the best album by Simon & Garfunkel. 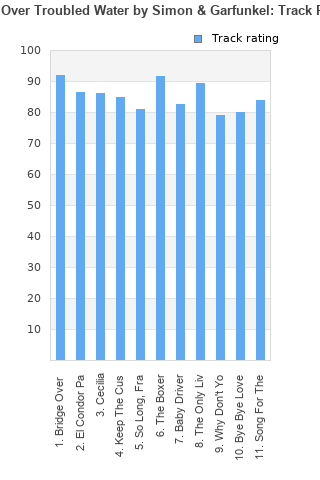 Rating metrics: Outliers can be removed when calculating a mean average to dampen the effects of ratings outside the normal distribution. This figure is provided as the trimmed mean. A high standard deviation can be legitimate, but can sometimes indicate 'gaming' is occurring. Consider a simplified example* of an item receiving ratings of 100, 50, & 0. The mean average rating would be 50. However, ratings of 55, 50 & 45 could also result in the same average. The second average might be more trusted because there is more consensus around a particular rating (a lower deviation).
(*In practice, some albums can have several thousand ratings)
This album is rated in the top 1% of all albums on BestEverAlbums.com. This album has a Bayesian average rating of 84.0/100, a mean average of 83.2/100, and a trimmed mean (excluding outliers) of 84.1/100. The standard deviation for this album is 13.0.

Simon & Garfunkel's magnum opus. It's a fantastic record from start to finish, and it features some of my all-time favorite songs, both fun (Keep the Customer Satisfied, Baby Driver) and poetic (title track, The Boxer). Essential listening for anybody.

Worse than bookends, but The Boxer is in contention for one of the greatest songs of all time

Paul Simon is underrated in a weird kind of way, and I think it's because he's kind of a boring personality. Somebody once made that point with the Pixies that they were boring people making extraordinary music. Same thing with Paul Simon. Who has the whole package of lyric writing, singing ability and musicianship than him? The great lyric writers (Dylan, Cohen, Waits, Young) generally aren't very good singers but I'd put him in that league and his voice is pretty good as well. And he's plays a variety of instruments and arranges well. I'm not saying he's a better writer than Dylan, but he's not far off. But Dylan is a waaaay more interesting person

Although there is a lot of filler, there are 2 outstanding songs:
The Boxer and Bridge Over troubled Water. I also liked If I could.

Simon & Garfunkel's best by a mile. The arrangements are gorgeous and the writing is the most excellent of their short existence. Paul Simon would of course go on to do greater things, but his genius is really starting to show here.

I hear Bride Over Troubled Water and i feel i can make anything better. The Boxer is a classic and El Condor Pas is my favorite humming song. I like the album and im happy that i have it a must have in my opinion .

Your feedback for Bridge Over Troubled Water