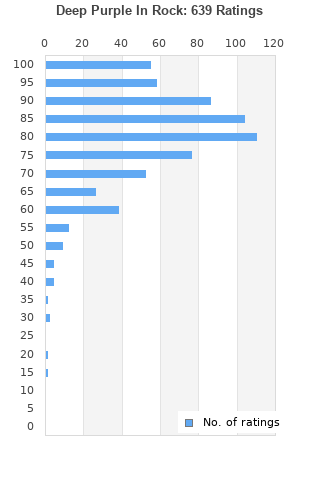 Deep Purple In Rock is ranked 2nd best out of 64 albums by Deep Purple on BestEverAlbums.com.

The best album by Deep Purple is Machine Head which is ranked number 242 in the list of all-time albums with a total rank score of 7,650. 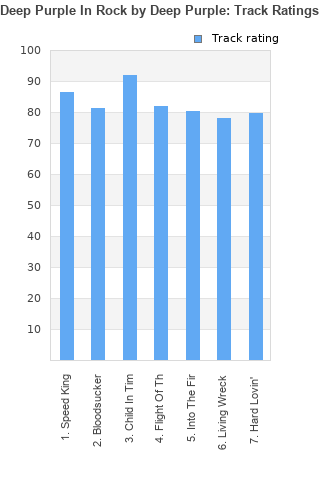 Rating metrics: Outliers can be removed when calculating a mean average to dampen the effects of ratings outside the normal distribution. This figure is provided as the trimmed mean. A high standard deviation can be legitimate, but can sometimes indicate 'gaming' is occurring. Consider a simplified example* of an item receiving ratings of 100, 50, & 0. The mean average rating would be 50. However, ratings of 55, 50 & 45 could also result in the same average. The second average might be more trusted because there is more consensus around a particular rating (a lower deviation).
(*In practice, some albums can have several thousand ratings)
This album is rated in the top 1% of all albums on BestEverAlbums.com. This album has a Bayesian average rating of 81.1/100, a mean average of 80.5/100, and a trimmed mean (excluding outliers) of 81.2/100. The standard deviation for this album is 13.3.

Great, revolutionary at the time hard rock front to back. There is no filler on this album.

Its influence and historical significance are enormous, but it isn't an album I find myself coming back to it.

A Landmark in the history of Rock especially Hard Rock, a must hear: Speed King, Child In Time, Into The Fire.

Machine Head gets all the praise. This album has a classic sound and outstanding songwriting.

In Rock is every bit as important as the first two Zep albums or the first two Sabbath albums; the two bands they get compared to. It does things that those albums just don’t, mostly because they don’t have a Jon Lord playing keys.

If you pick up this album, the 25th anniversary edition is the only way to go. It includes the restored intro to Speed King, Black Night, and Cry Free. Cry Free might be the earliest example of speed or thrash metal I’ve heard outside of Communication Breakdown.

Landmark and Essential doesn't begin to describe the significance of this album , first there was nothing then there was this album then Heavy Rock existed - it's as simple as that

Jon Lord is absolutely shredding his Hammond B-3 and pushing his Marshall & Leslie cabinets to their limits with the volume dialled to 11 on every track. And think about this for a moment , the seminal track "Black Night" didn't even make this album later released as a single only. Ridiculous

If you haven't heard 'In Rock' your not a rock fan

Your feedback for Deep Purple In Rock