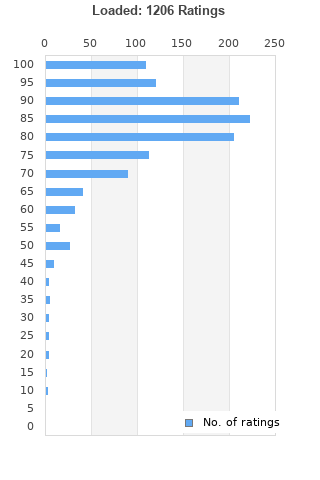 Loaded is ranked 3rd best out of 18 albums by The Velvet Underground on BestEverAlbums.com. 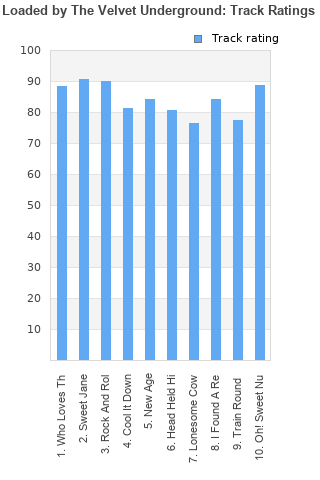 Rating metrics: Outliers can be removed when calculating a mean average to dampen the effects of ratings outside the normal distribution. This figure is provided as the trimmed mean. A high standard deviation can be legitimate, but can sometimes indicate 'gaming' is occurring. Consider a simplified example* of an item receiving ratings of 100, 50, & 0. The mean average rating would be 50. However, ratings of 55, 50 & 45 could also result in the same average. The second average might be more trusted because there is more consensus around a particular rating (a lower deviation).
(*In practice, some albums can have several thousand ratings)
This album is rated in the top 1% of all albums on BestEverAlbums.com. This album has a Bayesian average rating of 82.5/100, a mean average of 81.7/100, and a trimmed mean (excluding outliers) of 82.5/100. The standard deviation for this album is 13.6.

I don't enjoy it as much as first listen but there are still some decent songs here.

Unpopular opinion but this is my favorite Velvet Underground album at the moment, maybe not their best but the most accesible and not so noisy as VU&N or White Light/White Heat

People are arguing in the comments if this is their worst album. Personally its my 3rd favorite
But wow if this might even arguably be their worst then one must say that VU was an incredible band.

First listen in years and always my least favourite of the 4, it sounds even more of a drop in quality from the last album than I remember. As has been said, first 3 tracks and the last are great but the rest is nowhere near velvet greatness of the past. It's still a decent album, but no classic like the rest. I prefer the 80s lost recordings release to this.

I feel a personal and positive connection with almost every song on this album.

First 3 tracks and last track are amazing, rest is forgettable to me.

This album is so underrated. People often place it at the bottom of the VU's discography but Imo it's as good as TVU&N.

Your feedback for Loaded