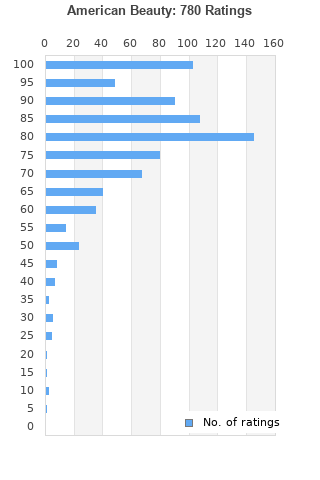 Grateful Dead "American Beauty" Picture Disc 50th Anniversary
Condition: Used
Time left: 3h 36m 52s
Ships to: Worldwide
$39.99
Go to store
Product prices and availability are accurate as of the date indicated and are subject to change. Any price and availability information displayed on the linked website at the time of purchase will apply to the purchase of this product.  See full search results on eBay

American Beauty is ranked as the best album by Grateful Dead. 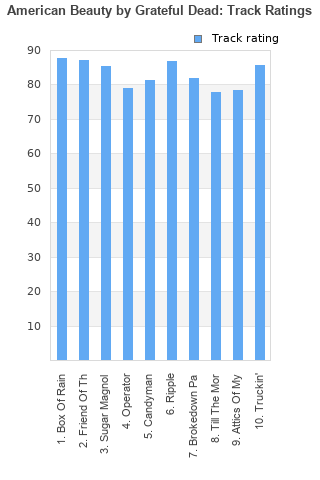 Rating metrics: Outliers can be removed when calculating a mean average to dampen the effects of ratings outside the normal distribution. This figure is provided as the trimmed mean. A high standard deviation can be legitimate, but can sometimes indicate 'gaming' is occurring. Consider a simplified example* of an item receiving ratings of 100, 50, & 0. The mean average rating would be 50. However, ratings of 55, 50 & 45 could also result in the same average. The second average might be more trusted because there is more consensus around a particular rating (a lower deviation).
(*In practice, some albums can have several thousand ratings)
This album is rated in the top 2% of all albums on BestEverAlbums.com. This album has a Bayesian average rating of 80.3/100, a mean average of 79.3/100, and a trimmed mean (excluding outliers) of 80.4/100. The standard deviation for this album is 15.9.

When I was younger, I felt like "Operator" killed the momentum of the album and then "Candy Man" did nothing to revive it. These days I appreciate those songs a lot. It is interesting to listen to things again after many years and see how one reacts differently.

It's hard to believe that jam band icon Grateful Dead made one of the finest country-rock records of all time, filled with simple and focused melodies instead of improvisation and psychedelic experimentation. It's flawed, yet perfect. Wistful, yet charming. Loose, yet effortfully assembled.

Their most accessible and enjoyable album, despite never having been a fan of country. Overall, 65/100.

For me A. B is almost perfect, listen this record is the most energetic and spiritual experience in rock music, the best of the large discography of Grateful dead, this has an interesting mix of Folk, Country, blue grass, psychedelic, and a bit of hard rock.....very recommendable.

I'm torn. On one side of the spectrum there's the people who goof on Grateful Dead endlessly and on the other side there's people who followed them around like creepy stalkers. But the songs don't deserve either side of this hate or love. Lukewarm at best, but enjoyable.

I believe this is their best studio album with such classics as Box of Rain, Friend of the Devil, Sugar Magnolia, Ripple & Truckin’. You will hear at least a few of these songs on a bulk of their live albums. It’s a very cohesive set no need to skip any songs.

The Dead prove that if they want to release a pop album, they can do it as well as anybody.

I get that the Deadheads love it when Phil Lesh sings Box of Rain, but that's a taste I can't acquire. After that, it's real good up through Ripple, then it completely loses me. Too much singing, not enough playing; it's as if they're trying to take on CSN, and that's not their game. There are six or seven Dead albums I like better than this one, and that's just the standard ones, before you get to all the Dick's Picks and whatnot.

Your feedback for American Beauty