After The Gold Rush (studio album) by Neil Young 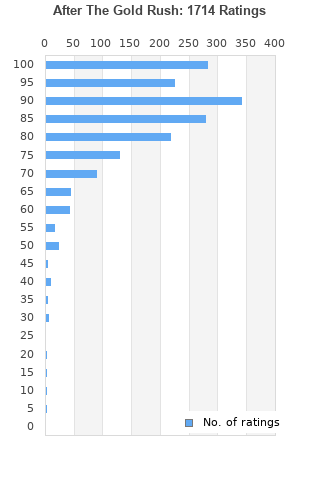 After The Gold Rush is ranked as the best album by Neil Young. 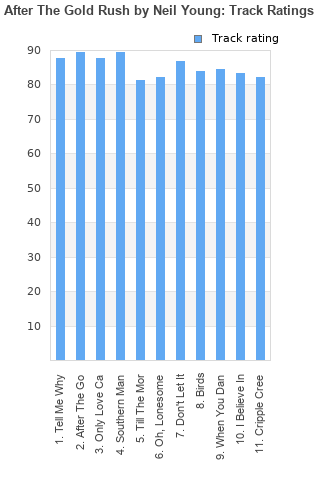 After The Gold Rush rankings

After The Gold Rush collection

After The Gold Rush ratings

Rating metrics: Outliers can be removed when calculating a mean average to dampen the effects of ratings outside the normal distribution. This figure is provided as the trimmed mean. A high standard deviation can be legitimate, but can sometimes indicate 'gaming' is occurring. Consider a simplified example* of an item receiving ratings of 100, 50, & 0. The mean average rating would be 50. However, ratings of 55, 50 & 45 could also result in the same average. The second average might be more trusted because there is more consensus around a particular rating (a lower deviation).
(*In practice, some albums can have several thousand ratings)
This album is rated in the top 1% of all albums on BestEverAlbums.com. This album has a Bayesian average rating of 85.7/100, a mean average of 85.0/100, and a trimmed mean (excluding outliers) of 85.8/100. The standard deviation for this album is 13.0.

After The Gold Rush favourites

After The Gold Rush comments

Sad, lonesome music. I love it.

The whole album oozes class and depth while showing that Neil is fantastic at writing catchy lovable folk songs that show how great he is as a songwriter in multiple aspects.

My introduction to Neil Young was through a Nils Lofgren concert where Nils sang a couple of his songs, in fact Nils Lofgren has a vocal style which is similar to Neil Young. It was therefore quite late in my musical discovery that I began to buy his material, this being the starting point. I think the stand out tracks are the title track, Southern Man and Cripple Creek Ferry, I do enjoy the whole album though. It has a very laid back feel which I find quite therapeutic.

This is not as dynamic and entertaining as "Everybody Knows This Is Nowhere" and it is more folk than rock. That's why I enjoy previous album more. But on here we have undoubtedly great lyrics and some great melodies too. The best one for me is Southern Man, then After The Gold Rush, and there are a few more good cuts: Don't Let It Bring You Down and When You Dance

Just class all the way through. I love Neil's music, it never gets tired or dates.

I really enjoy listening to this album, a lot good songs on it. A another good album by Neil

Your feedback for After The Gold Rush