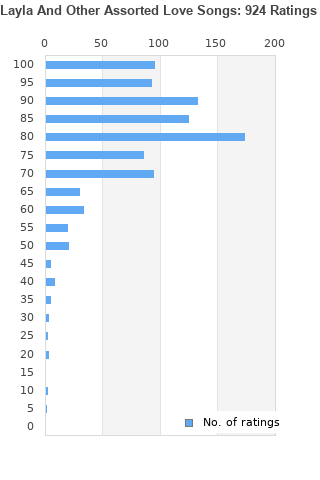 Layla And Other Assorted Love Songs is ranked as the best album by Derek & The Dominos.

Listen to Layla And Other Assorted Love Songs on YouTube 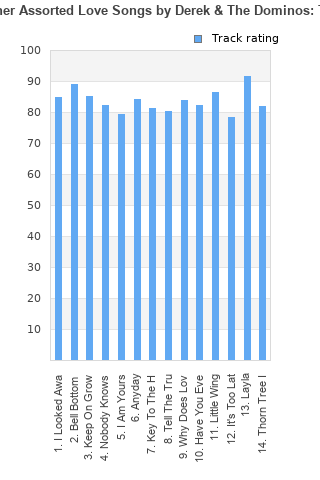 Rating metrics: Outliers can be removed when calculating a mean average to dampen the effects of ratings outside the normal distribution. This figure is provided as the trimmed mean. A high standard deviation can be legitimate, but can sometimes indicate 'gaming' is occurring. Consider a simplified example* of an item receiving ratings of 100, 50, & 0. The mean average rating would be 50. However, ratings of 55, 50 & 45 could also result in the same average. The second average might be more trusted because there is more consensus around a particular rating (a lower deviation).
(*In practice, some albums can have several thousand ratings)
This album is rated in the top 1% of all albums on BestEverAlbums.com. This album has a Bayesian average rating of 81.4/100, a mean average of 80.5/100, and a trimmed mean (excluding outliers) of 81.5/100. The standard deviation for this album is 14.8.

Layla is an all-time great track and there are couple more standouts but outside of that pretty mediocre stuff.

Great band cutting loose, recorded badly but what can you do. Even if you're sick of the title song, the first three sides are great for just hearing Clapton and Jim Gordon and all these guys doing their thing.

Bobby Whitlock, of course, is the piano player and second singer on this album. If you go to YouTube and find his channel, he has in the last few months been doing a bunch of little talks sitting at a table with his wife, reminiscing about this album and All Things Must Pass especially, and his encounters with other rock stars, everybody from Keith Moon to Elvis. He has many, many stories and thoughts about this album, he's been putting up a video nearly every day recently; highly recommended.

He responds to comments sometimes, but I don't have the guts to ask him how he feels about the sound quality of the thing. The legendary producer Tom Dowd gets lots of respect, deservedly so for much of his other work. But this is a great album for the playing, not for the sound, which is famously bad. One thing Whitlock did take exception to was Dowd saying in his memoirs that they had run dry of inspiration after the first three songs and then Duane Allman came in and energized everything. Whitlock said that was totally false and is angry that Dowd wrote it and made it history. Anyway, in addition to being a natural born musician, he's a good storyteller and you might want to check out his channel.

Three sides of 100-level material with just a couple of question marks.

More bluesy than I expected. Some great tracks throughout. Rating (78.21)

Eric Clapton doing what he does best, and doing it very well. One of the best guitarists on the planet. Duane Allman isn't a name to scoff at either, as is any other musician on here.

I recommend listening to this and All Things Must Pass, as they are complimentary of each other and de facto companion pieces. Not all in one go, unless you have 3 hours to spare.

Very good, but it is too long.

Your feedback for Layla And Other Assorted Love Songs