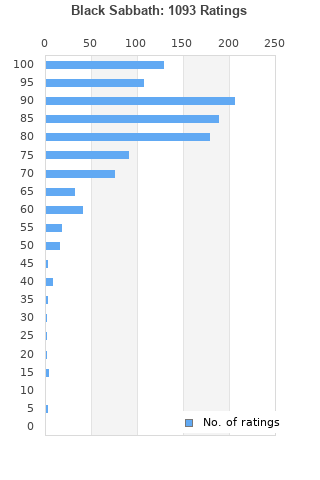 Technical Ecstasy by Black Sabbath [Digipak] (CD, Aug-2016, Warner Bros.) *NEW*
Condition: Like New
Time left: 30m 18s
Ships to: Worldwide
$3.50
Go to store
Product prices and availability are accurate as of the date indicated and are subject to change. Any price and availability information displayed on the linked website at the time of purchase will apply to the purchase of this product.  See full search results on eBay

The best album by Black Sabbath is Paranoid which is ranked number 67 in the list of all-time albums with a total rank score of 22,042. 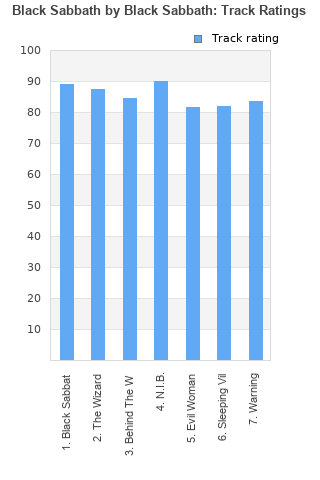 Rating metrics: Outliers can be removed when calculating a mean average to dampen the effects of ratings outside the normal distribution. This figure is provided as the trimmed mean. A high standard deviation can be legitimate, but can sometimes indicate 'gaming' is occurring. Consider a simplified example* of an item receiving ratings of 100, 50, & 0. The mean average rating would be 50. However, ratings of 55, 50 & 45 could also result in the same average. The second average might be more trusted because there is more consensus around a particular rating (a lower deviation).
(*In practice, some albums can have several thousand ratings)
This album is rated in the top 1% of all albums on BestEverAlbums.com. This album has a Bayesian average rating of 83.2/100, a mean average of 82.4/100, and a trimmed mean (excluding outliers) of 83.3/100. The standard deviation for this album is 13.7.

The album that is the true birth of heavy metal. A fantastic debut album on any level. Still defining the sound which was to immortalize them. There cover is 'Evil Woman' is great. As is the mainly instrumental Sleeping Village/Warning. One of there better albums.

I didn't care for it too much initially, but it has since become one of my most listened albums of the past few months.

For me this album is up there with Sgt. Pepper, Led Zep IV and Dark Side (well nearly).

The birth of metal with those opening chords is something divine to witness.

What a debut album. The frightening cover sets the scene for the first track, with the heavy rain, thunder and tolling Church bell. My only slight irritation with the whole album is the fact that Ozzy used the word 'me' at the end of the same verse twice in the opening vocal lines of track one i.e 'what is this I see before me' and 'figure looking at me'. He could have been a bit more creative here. Apart from that minor irritation it is a solid metal album which i enjoy listening to occasionally. There is a 'haunting feel' to the recording which is complimented by the harmonica. Some great guitar soloing thrown in to boot.

'Black Sabbath' title track has that horrific metal sound you associate with the band the other in 'N.I.B', a lot of the other tracks are standard rock to me like Led Zepp and Purple,the track 'Warning'sounds like a little element of the Doors in there to me also.

Your feedback for Black Sabbath