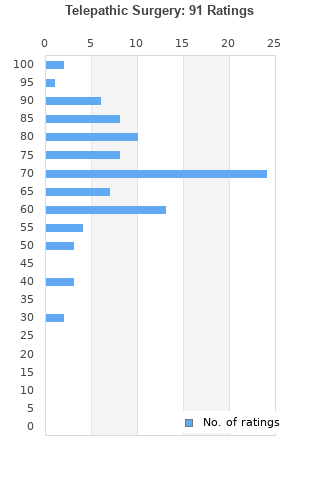 Telepathic Surgery is ranked 12th best out of 46 albums by The Flaming Lips on BestEverAlbums.com.

The best album by The Flaming Lips is The Soft Bulletin which is ranked number 115 in the list of all-time albums with a total rank score of 13,510. 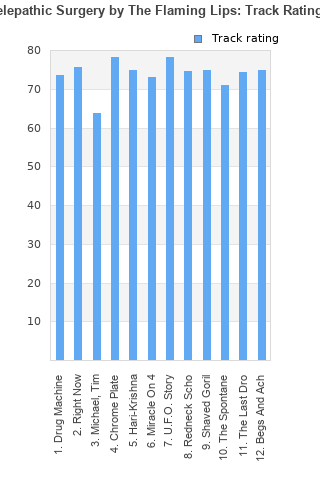 Rating metrics: Outliers can be removed when calculating a mean average to dampen the effects of ratings outside the normal distribution. This figure is provided as the trimmed mean. A high standard deviation can be legitimate, but can sometimes indicate 'gaming' is occurring. Consider a simplified example* of an item receiving ratings of 100, 50, & 0. The mean average rating would be 50. However, ratings of 55, 50 & 45 could also result in the same average. The second average might be more trusted because there is more consensus around a particular rating (a lower deviation).
(*In practice, some albums can have several thousand ratings)
This album has a Bayesian average rating of 70.5/100, a mean average of 70.2/100, and a trimmed mean (excluding outliers) of 70.2/100. The standard deviation for this album is 13.9.

I'm with the consensus. This is the worst Lip's record. Their first album wasn't good either but they were showing signs of improvement on their second album. This is regressing back to the poor quality first album

Quite garage punky whilst still using a bit of psychedelia from their previous record. It's a good outing, creepy in places, but nowhere near their best work.

I’m sad to learn just now that the 23 minute “Hells Angels Cracker Factory” is a bonus track only on the 2005 CD release. I thought it was the coolest song on here!

Propulsive noise rock that isn't as disastrous as many others claim it is (I've heard "worst flaming lips album" thrown around quite a lot on music sites). In fact, it's pretty much on par with their first two records although it feels murkier. The only issue here, as with their first two, is that most of these songs feel a bit one-dimensional (which they resolve on subsequent releases).

I agree Pam..Hell's Angel's Cracker Factory just HAS to be heard alongside Sister Ray, Frankie Teardrop, Mushroom Cloud Of Hiss, Interstellar Overdrive, Chasing A Bee, Down By The River and Loose.

Tripping to Hell's Angels Cracker Factory, 1001 things you must hear before you die.

The greatest and craziest disciples of classic Pink Floyd came out of Flaming Lips, whose art bridged the punk ethos and the hippie burlesque. Their aesthetics was in many ways derived by cartoons: shapes that were grossly naive and easily identifiable, stereotyped characters that bordered on parodies, simplified and often implausible situations. The sound created on 'Telepathic Surgery' (1989) is wildly demented. Exaggerated guitar surges and maniacal drumming patterns allied with stylistic collages, create an absolutely phenomenal soundscape. Abrasive crescendos crash amid roaring motorcyle engines, tingling piano motifs and thrashing cymbals. The tempo takes Neil Young's guitar nuerosis to a new level of unorthodoxy and psychosis. This sound is taken to its extreme on 'Hell's Angel's Cracker Factory', one of rocks most extraordinary and monumental ever pieces. 'Telepathic Surgery' is one of rocks post-modern psychedelic classics.

Your feedback for Telepathic Surgery