The Soft Bulletin (studio album) by The Flaming Lips 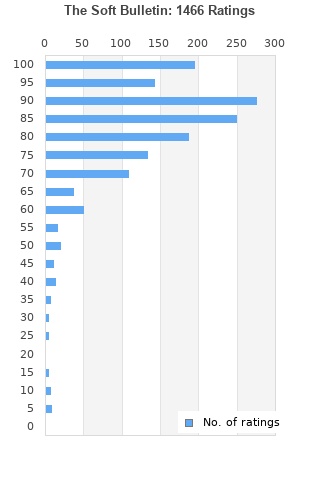 The Soft Bulletin is ranked as the best album by The Flaming Lips. 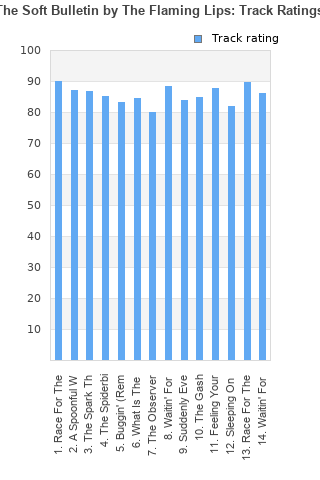 Rating metrics: Outliers can be removed when calculating a mean average to dampen the effects of ratings outside the normal distribution. This figure is provided as the trimmed mean. A high standard deviation can be legitimate, but can sometimes indicate 'gaming' is occurring. Consider a simplified example* of an item receiving ratings of 100, 50, & 0. The mean average rating would be 50. However, ratings of 55, 50 & 45 could also result in the same average. The second average might be more trusted because there is more consensus around a particular rating (a lower deviation).
(*In practice, some albums can have several thousand ratings)
This album is rated in the top 1% of all albums on BestEverAlbums.com. This album has a Bayesian average rating of 83.1/100, a mean average of 82.0/100, and a trimmed mean (excluding outliers) of 83.2/100. The standard deviation for this album is 15.9.

I wonder about the high position of this album in the Bea All-Time list. Too high, I do not get this music. Do not actively hate it, but a relisten of this thing is not going to happen,

Interesting music matched with appropriately weird vocals. Wayne is that guy you hang with on the off chance that one of the thousand bizarre things he’s going to say will be truly profound.

Sugery psychedelic pop fused with electronics is such an ear candy for me, also Wayne really fits his "ugly" vocals in his music. It suits with the sci-fi like production. Can't really understand the lyrics, but for me it's all the melody and the production. Overall, a masterpiece. 9/10

I have to go with the consensus on this one.....easily their best album. I know he doesn't have a good voice, (and it's especially bad here) but for some reason I like his singing anyway. Maybe because it's raw emotion and fits the music in a weird way. Near perfect album. Best songs are Race for the prize, Waiting for a superman, feeling yourself disintegrate

Fav. Tracks: Race For The Prize, A Spoonful Weighs A Ton, Buggin', Waitin' For A Superman, Sleeping On The Roof.

The music is cool but this guy is just an incredibly bad singer.

Your feedback for The Soft Bulletin