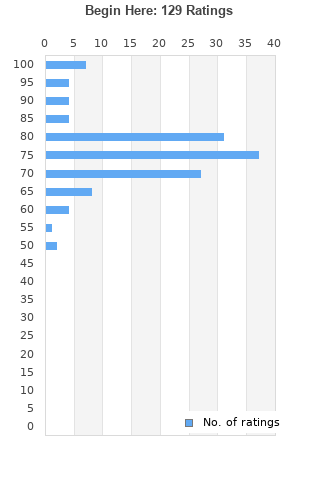 Begin Here is ranked 2nd best out of 18 albums by The Zombies on BestEverAlbums.com.

The best album by The Zombies is Odessey And Oracle which is ranked number 87 in the list of all-time albums with a total rank score of 16,386. 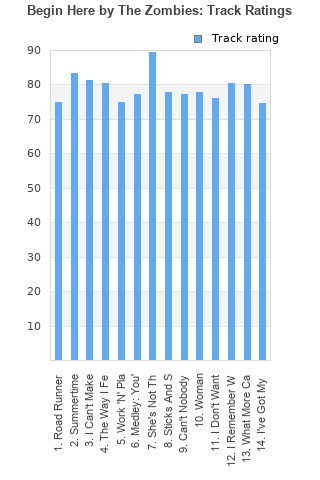 Rating metrics: Outliers can be removed when calculating a mean average to dampen the effects of ratings outside the normal distribution. This figure is provided as the trimmed mean. A high standard deviation can be legitimate, but can sometimes indicate 'gaming' is occurring. Consider a simplified example* of an item receiving ratings of 100, 50, & 0. The mean average rating would be 50. However, ratings of 55, 50 & 45 could also result in the same average. The second average might be more trusted because there is more consensus around a particular rating (a lower deviation).
(*In practice, some albums can have several thousand ratings)
This album is rated in the top 6% of all albums on BestEverAlbums.com. This album has a Bayesian average rating of 76.2/100, a mean average of 76.5/100, and a trimmed mean (excluding outliers) of 76.5/100. The standard deviation for this album is 9.6.

The Zombies released their first album, "Begin Here" in April 1965 after having coloured the charts on both sides of the Atlantic in late 1964 with the singles "She's Not There" and "Tell Her No". In fact, the group released two more singles and an EP before the release of "Begin Here". Except for Gershwin's "Summertime" from the EP, all of the group's released tracks had been self-written. So you would thus expect a debut album would be dominated by the group originals; this is only partially the case as half of the 14 tracks are covers. This was very common at this time and especially new groups drew heavily on their live material and were probably also encouraged by managers and producers to supplement with songs by well-established songwriters.
In the case of The Zombies, however, this had not been necessary; firstly because the group had originals recorded to fill an entire album, and secondly because the group's own material is by far the most interesting. Rod Argent and Chris White convincingly showcase their songwriting talents which measure the greatest at the time. Among the cover versions, "Summertime" is clearly the most successful. The track fits well with Colin Blunstone's vocals and overall with the group's sound. Philip Mitchel's soul ballad "Can't Nobody Love You" is also fine, and their version of the more upbeat r&b number "Sticks and Stones" also works fine.

Unfortunately, the other four are awful to varying degrees. Blunstone is no John Lennon or Mick Jagger and his vocals on tracks like "Roadrunner" and "I Got My Mojo Working" are at times shrill and hard to endure. "You Really Got a Hold on Me" is tolerable, while "Work'n Play" is a fairly ordinary instrumental.

As mentioned, it is the group's originals that make the album worthwhile. Rod Argent's "She's Not There" is a classic pop-art single. Very catchy but also different from how most of the groups sounded at time with a dominant electric piano and a slightly jazzy undertone. The group's fine vocal work is also in the spotlight. Argent has also written the two very melodic and subdued songs "The Way I Feel Inside" and "I Remember When I Loved Here"; the latter is one of the group's finest early ballads. Finally, Argent has also wrote the upbeat r&b track, "Woman", with a fine driving bass / guitar line.

Chris White's songwriting-style is a bit more classic Mersybeat, but all of his three songs "I Can't Make Up My Mind", "I Don't Wan't To Know" and "What More Can I Do" are very melodic and catchy and confirm a songwriting talent that matches that of Rod Argent. Too bad more originals were not included; however, this has been remedied on later CD releases where contemporary fine tracks such as "It's Alright With Me", "Sometimes", Kind of Girl "," Tell Her No "," I Know She Will "and" I'll Keep Trying ”Can be found among the bonus-tracks

No Zombie album, not made by walking dead. A Very lively album, fun.

Not quite the achievement that Odessey and Oracle is but still has some of their most memorable songs like She's Not There and I Can't Make Up My Mind.

Favoritas: Summertime, She's Not There, You've Really Got a Hold On Me, I Can't Make Up My Mind

More hit or miss than The Zombies' later pop masterpiece, Odessey and Oracle, their debut still has plenty of wonderful songs, including the breathy, infectious hit "She's Not There," the somber, ethereal "I Remember When I Loved Her," the great little rave-up "What More Can I Do," the catchy "I Can't Make Up My Mind," and a beautiful, definitive version of Gershwin's "Summertime." Nothing else on here is terribly special, but it hardly mattered; this was before the era of album-oriented rock, and LPs were pretty much released to capitalize on the success of singles—in this case, "She's Not There." The U.S. version of this record, simply called The Zombies, dropped a few of the lesser covers and added two great originals: the single "Tell Her No" and the rocker "It's Alright With Me." That version: 85/100. The Zombies, after their initial success, would flounder for years, putting out clever, underappreciated singles, before their brilliant swan song, Oracle. Their leader, Rod Argent, would go on to found the prog-rock band Argent and have a big hit in the seventies with "Hold Your Head Up."

Best Track: She's Not There

Your feedback for Begin Here