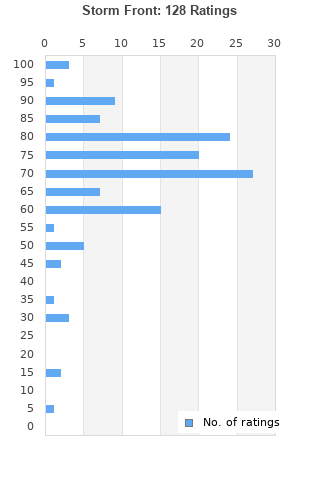 BILLY JOEL Storm Front cassette tape NM
Condition: Like New
Time left: 2h 34m 55s
Ships to: Worldwide
$6.99
Go to store
Product prices and availability are accurate as of the date indicated and are subject to change. Any price and availability information displayed on the linked website at the time of purchase will apply to the purchase of this product.  See full search results on eBay

Storm Front is ranked 9th best out of 25 albums by Billy Joel on BestEverAlbums.com.

The best album by Billy Joel is The Stranger which is ranked number 250 in the list of all-time albums with a total rank score of 7,844. 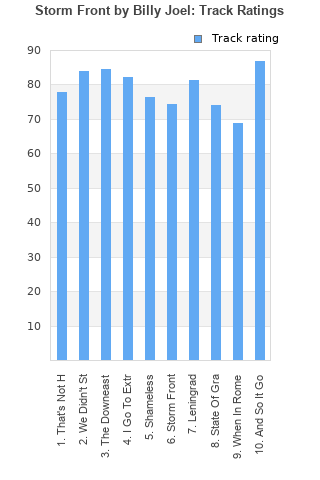 Rating metrics: Outliers can be removed when calculating a mean average to dampen the effects of ratings outside the normal distribution. This figure is provided as the trimmed mean. A high standard deviation can be legitimate, but can sometimes indicate 'gaming' is occurring. Consider a simplified example* of an item receiving ratings of 100, 50, & 0. The mean average rating would be 50. However, ratings of 55, 50 & 45 could also result in the same average. The second average might be more trusted because there is more consensus around a particular rating (a lower deviation).
(*In practice, some albums can have several thousand ratings)
This album has a Bayesian average rating of 71.0/100, a mean average of 69.2/100, and a trimmed mean (excluding outliers) of 70.8/100. The standard deviation for this album is 16.0.

Get's a bad rep, not a great album by any means, but should be held in higher regard anyways.

Big change in Billy's sound but still a respectable release.

Basically a better version of 'The Bridge', this album has a bundle of great songs, among them is his greatest ever track 'And So It Goes'.

Probably Joel's weakest album. Storm front is an example of an artist running out of ideas. It doesn't sound as though he was particularly inspired during this time. Still, it's not a terrible record. We didn't start the fire, is one Joel's great latter day singles, and, I go to extremes, which is half decent pop. The album does contain though, one of Billy Joel's greatest tracks. The downeaster Alexa, is a fantastic folky/rock track about fishermen working off the shores of long island, brilliant. Other tracks which are good are, Leningrad, and the beautiful ballad, and so it goes. There are a couple of tracks though, state of grace, and, when in Rome, which are possibly Joel's worst two songs. It sounds like he wrote them in his sleep. All in all, it's still an ok listen, but it's hard to believe, apart from a few moments here and there, that this is the same man who made, the stranger, and, glass houses albums. Disappointing.

Your feedback for Storm Front